U15 Girls: Third title in a row for Thais 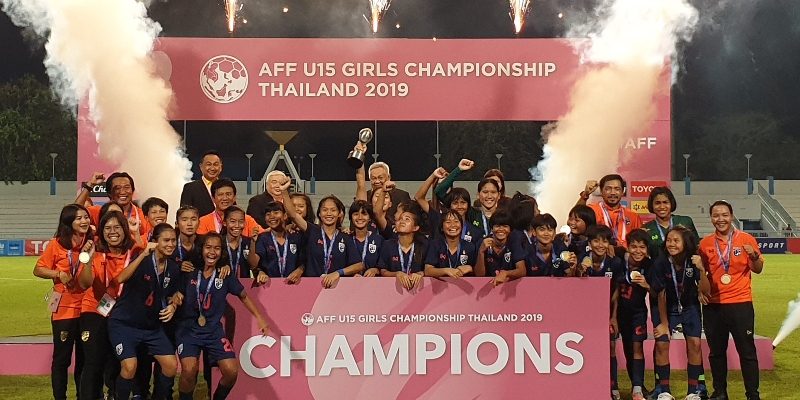 CHONBURI (21 May 2019) – Thailand made it their third title in a row in the AFF Under-15 Girls’ Championship when they beat Laos 5-3 in the penalty shooutout in the final that was played here at the Institute of Physical Education Stadium.

With the score at the end of the regulatory 80 minutes tied scoreless, it was to be the penalty spot that would decide the winner this time round.

Unlike their victories in 2017 when they thumped the Philippines 6-2 in Vientiane, Laos and then edging Myanmar 1-0 last year in Palembang, Indonesia, this time round Thailand’s win was really close.

It was the first time in the champinship that the final was decided by penalty shootouts.

Thailand, having licked their wounds following the 5-2 thrashing they suffered at the hands of Laos in the group stage, put up a more polished performance.

They were all over the tournament top scorer Pe as they closed her down as soon as her feet touched the ball.

With Pe largely out of the picture with Phinyada Phathakor doing a swell job in shadowing her the whole night long, Thailand were in full control but just found it tough to get behind the Laos defence line.

Thailand’s first real chance was at the half hour mark with a long pass from deep that Nualanong Muensri just could not get the last touch to ahead of Laos keeper Vilada Nithisan.

With Laos restricted to shots from distance, Thailand finished the half with a gallant effort from Thanatphat Bunthong that could have seen a better finish.

Into the second half and both teams were still struggling to break the deadlock with Chinda Sihalath and then Pe’s solo effort coming up against a determined Thai backline.

And right at the end, Thai captain Chattaya Pratumkul had perhaps the best chance of the night but in spite of getting ahead of two Laos defenders, she just could not beat custodian Vilada.

In the ensuing penalty shootout, Thailand scored their first attempt through Thawanrat Promgthongmee as did Laos’s Pe.

But after Thailand scored the second through Nualonong, the ensuing miss by Laos’ Chaikham that cane off the crossbar, would spell victory for the homesters.

Laos’ two other penalties were scored by Vilayphone Phengsana and Chinda.