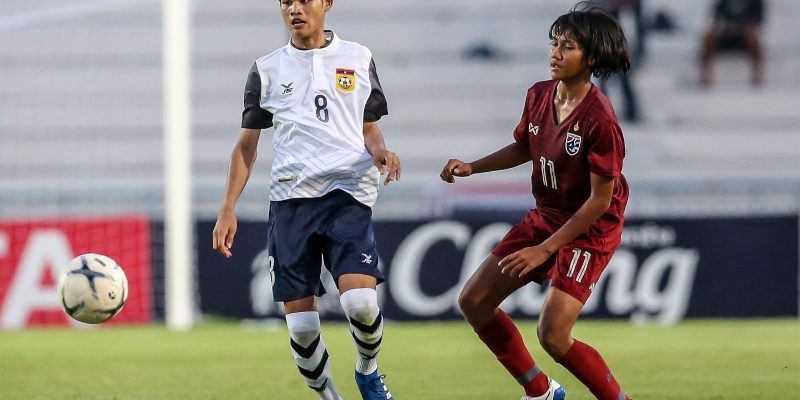 CHONBURI (17 May 2019) – Striker Pe has a habit. A habit of scoring hat tricks and her third in four matches gave Laos a well-deserved 5-2 win over hosts Thailand in their final Group B match of the AFF Under-15 Girls Championship 2019 here at the Institute of Physical Education Stadium.

“The reason I managed to score was all due to the support from my team mates and I have to thank them,” said the modest Pe, who scored four goals in the win today.

Added Laos head coach Phonethip Sengmany: “we stuck to the plans but really I was surprised by how the girls played. They really controlled the game well.”

Following from Thailand’s demolition of Malaysia in their last game, there were expectations that the hosts would put up another sterling performance.

But that was not to be. With the speedy Pe on their side, Laos were not at all easy to handle and the so far untested Thai backline struggled to peg her pace.

And just a minute into the game, Thailand found themselves trailing behind when Pe intercepted a bad pass to put the ball beyond the reach of keeper Pawarisa Homyamyen.

By the 15th minute, Laos were already 3-0 up with Pe on target on both occasions – the first in the sixth minute when she traipsed past two defenders to score and the other when she misled her marker to find the back of the Thai net.

Thailand found themselves in real trouble in the 26th minute when Souphaphone Xaysoula made good on the cross from Chaikham for Laos to stretch to a 4-0 lead.

But the home team fought back with two goals – at the half hour mark through Phinyada Phathakor and eight minutes later when Laos keeper Vilada Nithisan was penalised for bringing her down.

Into the second half, Thailand upped the tempo as they look for the equaliser but for all the gallant effort from Thanatphat Bungthong, they just could not find their way through Laos’ last line of defence.

They came close, real close but Laos were just not to be denied.

And the icing on the cake came right at the end but from who else but Pe as she made good from inside the box.

“We have our work cut for the semifinals. And certainly we need to improve on a lot of issues,” said Thai head coach Naruephon Kaenson.