U15 Girls: Malaysia bounce back to beat Cambodia 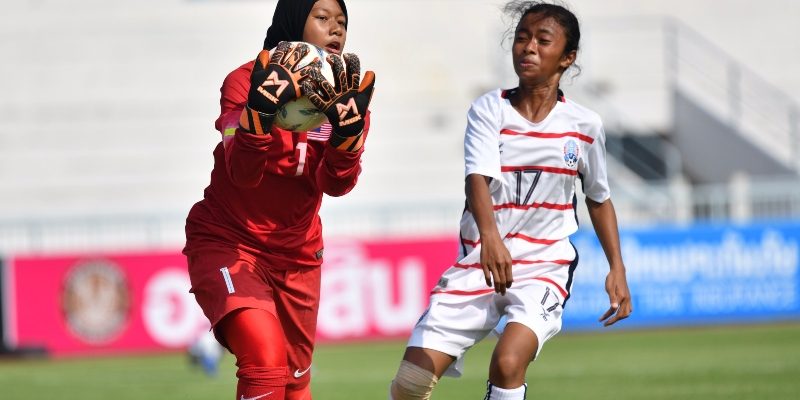 CHONBURI (11 May 2019) – The Malaysian girls staged a strong fight back in their second game of Group B of the AFF Under-15 Girls’ Championship to beat Cambodia 2-1 here at the Institute of Physical Education.

After falling 4-0 in their first match to Laos, the Malaysians put up a stronger performance to pick up their first three points of the competition.

“I was so happy to have scored today especially when it was the winner,” said Malaysian match winner Celine Chuang. I will be out to make sure that I get to score again in the next match.”

Following from the heavy downpour the previous night, the afternoon heat came bearing down but it did not affect the pace nor the rhythm of the match.

Both teams were all eager to grab their first win of the competition after stuttering in their respective opening matches with Cambodia having conceded an identical 2-1 loss to Singapore two days earlier.

And the Cambodian girls were all pumped up with Sem Keany leading the frontline against a reshuffled Malaysian defence.

But while Malaysian defender Lauren Hoh Ruyi and also Fatin Alissa Narzil did as well a job as they could, there was no stopping Chroung Sokkheng from breaking through in the 23rd minute off a fabulous solo effort down the right.

However, the Malaysians did not lose focus and just before the break, they managed to find the equaliser when Ain Nur Qaseh Azman headed in the rebound following an earlier corner.

The game picked up pace into the second half with both teams coming close on several occasions but in the end, it was the Malaysians who got the winner they were looking for with Celine’s strong run down the left to beat past two defenders for a tight shot into goal.