U15 Girls: Laos inch closer for place in final four 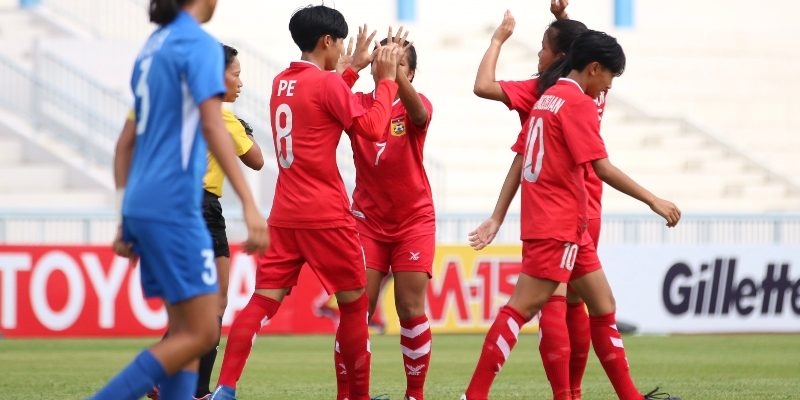 CHONBURI (13 May 2019) – Laos inched closer for a place in the semi-finals of the AFF Under-15 Girls’ Championship 2019 when they lambasted Singapore 7-0 in their second game of Group B that was played at the Institute of Physical Education Stadium.

And for the second game in a row striker Pe nailed a hat trick – as she moved up to second in the overall top strikers list alongside Vietnam’s Tran Nhat Lan with six goals.

“Of course I am glad to have scored another three goals today. It will certainly gives me motivation for the next match (against Cambodia),” said Pe after the match.

Having opened their campaign with a 4-0 win over Malaysia, the Laotian girls were playing with full of confidence as they took on a Singapore side which had conceded a 5-0 loss to Thailand.

Laos were passing the ball round confidently and just five minutes in, some hesitant defending on the part of the Singapore defence saw Souphaphone Xaysoula stabbing the ball home.

From then on, there was no looking back for Laos as their defensive line had a rather quiet afternoon for Pe – who had a hat-trick in her first match against Malaysia – to score her second hat trick in two matches played.

Her first was a close range finish from inside the box on 16 minute as she then picked up her second with a classy individual effort five minutes later.

Pe then completed her hat trick with an easy tap in off a pass up from Chinda Sihalath.

With a four-goal advantage, Laos were not letting up into the second half as they continued much in the same pacey manner they had done in the first half.

And in spite of the several substitutions, Laos still managed to score three more goals through Chaikham’s opportunistic strike in the 56th minute and then Chinda’s finish from the far end of the box just four minutes later.

Laos completed the win with Chaikham making a fine finish off a cross from Pe.