U15 Girls: Experience and exposure important 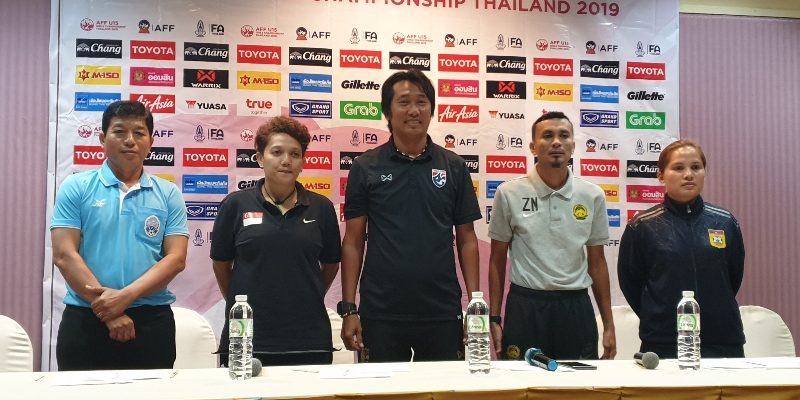 CHONBURI (8 May 2019) – Every coaches here for the AFF U15 Girls’ Championship resonated in unison that experience and exposure are the key factors in their participation for this year’s meet.

Into the third edition of this championship for young women, Thailand hold the accolade as the twice champions – but head coach Naruphon Kaenson was not about to get on the bragging train.

The Thais are in Group B against Cambodia, Singapore, Malaysia and Laos.

“I believe that all teams have improved since the past year. We are here for the experience as afterall, half of the team from last year had to be replaced. But we are ready, we are ready for the challenge,” said Naruphon.

“We had two weeks with the girls and we are looking at giving the players experience of playing football at different level. We hope that this will contribute to our overall improvements,” said Cambodian head coach Oum Savong.

“We had a UEFA tournament in Singapore to prepare this team, Our focus here would be on improving teamwork and experience a competitive atmosphere. We want the team to improve from their last game,” said Singapore head coach Tina Afrida.

“We had two months with this team but not with the complete set of players. The group stage is tough. And while we are looking for exposure, we are also aiming for a place in the semifinals,” said Malaysia head coach Mohd Zery Nazeri.

“Focus would be on getting experience where we had one month with the team that we had to change several new players from last year’s squad. We did not do well in 2017 when we hosted while last year, we improved to fourth,” said Laos head coach Phonethip Sengmany.

Over in Group A, the battle will be between four teams and they are Myanmar, Vietnam, Philippines and Timor Leste.

“All the teams are at the same level here. So it will be competitive were everyone wants to do well. We had a month with this team but generally, they lack experience, so it is important that they get it here,” said Myanmar head coach May Thu Tun.

“The team is very young and that is why I want them to get the learning experience. That is very important. We had the team for about a month and I hope that they will use this experience to not only be better players but also to be competitive,” said Vietnam head coach Nguyen Thi Mai Lan.

“We had some friendlies in the three weeks that we were together. And after finishing second in 2017, we would like to repeat that performance. We want the players to get the experience to be competitive. They need this competitive atmosphere,” said Philippines head coach Rachelle Reyes.

“This is our first time taking part in this tournament. For us, the results are not important. We want the girls to get the experience playing in a competition. The tournament is U15 but we have players even under the age of 12,” said Timor Leste head coach Lee Min Young.