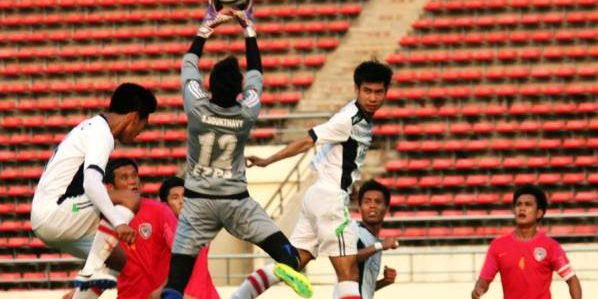 VIENTIANE (5 March 2014) – After scoring two wins out of two in the new season, defending champions Lao Police FC have wrested the top spot from leaders Lanexang Intra when they disposed of Ezra FC 4-1 at the National Stadium.

Tiny Bounmalai grabbed a double with goals in the 45th and 58th minute to be followed by further goals from Khitsakhone Champathong in the 84th minute and then Sinnalone Syhalath right at the end.

Sisavath Dalavong scored the only goal for Ezra in the 51st minute.

With Lanexang being held to a scoreless draw by SHB Champasak FC, the former has now slipped down to third as Ha-Attapeu FC moved up to the runners-up spot following their second win in two matches.

Ha-Attapeu were also on rampage when they disposed of Eastern FC 4-0 while Lao Army FC beat Lao Toyota 3-2.