Tickets to the Barclays Asia Trophy 2015 on sale 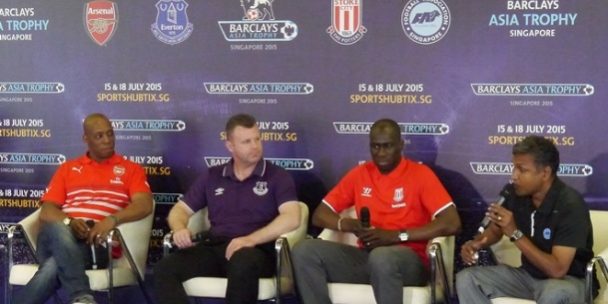 SINGAPORE (15 May 2015) – Match day tickets to attend the Barclays Asia Trophy 2015 in Singapore have already gone on sale.

The tournament, which takes place in the Lion City for the first time, will give fans the opportunity to see “live” Barclays Premier League stars like Arsenal’s Mesut Ozil, Everton’s Romelu Lukaku and Stoke City’s Peter Crouch in competition with Singapore’s finest players.

As another Barclays Premier League season heads towards an exciting finish, the next football action to feature the cream of English football will be in Singapore with the Barclays Asia Trophy in July.

Everton will take on Stoke City in the opening match of the tournament while the first test for the Singapore Select XI is to take on FA Cup Finalists Arsenal.

All three Premier League clubs will be bringing their first team squads with many star names expected to grace the National Stadium. And of course if the clubs have made new signings over the summer then fans here will be the first in the world to see them turn out for their new team.

The Barclays Asia Trophy 2015 sides have had a strong end to the season and will no doubt be keen to continue their winning ways in Singapore. The likes of Aaron Ramsey and Olivier Giroud have been in red-hot form for Arsenal. Everton have been on an impressive run thanks to the skills of Ross Barkley and Leighton Baines, while a spate of wonder goals from Charlie Adam and Jon Walters look set to ensure that Stoke City will have back-to-back top ten finishes in the top-flight of English football for the first time in 40 years.

The Premier League wants as many football fans as possible from Singapore and across South East Asia to pack out the National Stadium. And, in line with previous Barclays Asia Trophy tournaments, there is an aim to make tickets accessible and affordable for fans locally. With tickets sold according to match days (15 or 18 July), fans will be able to enjoy two matches for the price of one ticket, which is excellent value for money.

Over 90,000 tickets will be available to the public to buy over the two match days and 70% of the tickets will be on sale for S$70 or less. The cheapest adult ticket is S$40, while children will be able to watch from S$25.

The Barclays Asia Trophy has been held biennially since 2003 and is the only Premier League-affiliated competition to take place outside England. The four team knock-out competition will take place over two match days on Wednesday 15 and Saturday 18 July 2015, with a final to determine the winner and a play-off to decide third place.

The full schedule for the tournament is:

Ticket prices for each day (in Singapore dollars) are:

Supporters from the UK are advised to contact their club directly to enquire about tickets.

Arsenal manager Arsene Wenger is looking forward to getting reacquainted with the Gunners’ knowledgeable Asian fans: “I am pleased to be going to Singapore because Arsenal has many fans there and we always get a very warm welcome in Asia. We are always amazed by how much people know about our club and how popular the Premier League and Arsenal is. The digital age has made a miracle of football: when I am in press conferences it sometimes seems that people knew more about our club than I do! Certainly the Barclays Asia Trophy offers the people of Singapore a chance to get to know Arsenal even better.”

Roberto Martinez, the manager of Everton, thinks that the Barclays Asia Trophy will be competitive: “There’s something completely different about playing another Premier League side abroad pre-season. At home perhaps you play with the gloves on a little, the fans are relaxed and there’s no huge expectation to test yourself. But when you are abroad, competing for a trophy and playing for fans  who might be seeing you play for the very first time, then it is a little different – you want to put on a good show. I expect it will be competitive, which will help us reach a good physical level and that is going to help us start the season well. So I do feel there’s a real positive for us and the fans to face Premier League opposition.”

Stoke City boss, Mark Hughes, also believes that the fans in Singapore will see a high quality tournament: “I think it’s always great to see the top players of any league first hand. But the Barclays Asia Trophy is a great opportunity to see three Premier League teams in the flesh and I would encourage everyone to come and see these players plying their trade. We at Stoke City are really looking forward to it and the quality of the games in the Barclays Asia Trophy is going to help our preparation too. I think fans in Singapore will see players really trying to get their levels up to Premier League standard and I’m sure the quality of the matches will be really high.”

Sundramoorthy, Head Coach of Singapore Selection, added: “It is a very exciting opportunity to lead a Singapore side against household Premier League names. Playing against world class players is good for the development of our players, and the experience will be immense and invaluable to our backroom staff as well. Players love to play in front of large crowds against top teams. We hope our fans will make use of the reasonable ticket pricing to turn up in full force and fill the stadium, which will inspire the team to do well at the Barclays Asia Trophy. We are looking forward to the challenges and we will give these top teams a good fight.”