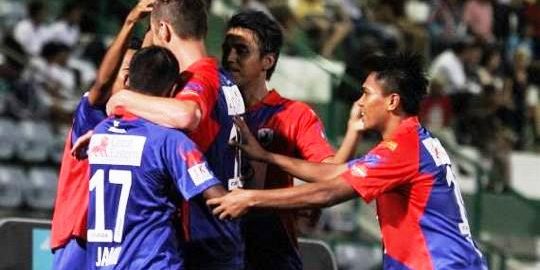 SINGAPORE (22 Feb 2013) – Tampines Rovers made a thumping start to their title defence in the S-League this week when they thrashed former champions Geylang International 5-0 in the match that was played at the Bedok Stadium.

Just nine minutes in, Tampines put their nose in front when Sead Hadzibulic nodded in the cross from Shaiful Esah. In the 22nd minute, Shaiful turned scorer with rifling shot off a freekick from 40 yards out to beat Geylang keeper Takuma Ito.

With a minute left of the first half, Tampines went further in front off Firdaus Kasman’s volley for them to take a comfortable 3-0 lead going into the break.

Despite some hard pressing from Geylang into the second half, the four-times S-League champions stood their ground to nail their fourth goal through Jamil Ali in the 62nd minute and fifth from Khairul Amri eight minutes to the end.