Three Wins out of Three for Najip FC 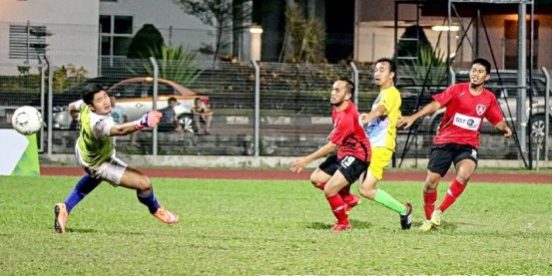 BANDAR SERI BEGAWAN (19 April 2015) – Najip I-Team made it three wins out of three when they pummelled Wijaya FC 4-0 in the DST Super League last night to remain perched at the top of the standings.

Azri Zahari broke the deadlock from inside the box after just 12 minutes before Wijaya tightened up their defence to prevent Najip from adding to the scoreline.

But six minutes into the second half, Mushready Chuchu grabbed the second for Najip when he nodded home a freekick as Azri then pounced on his second and of the game with an opportunistic strike at the hour mark.

Mohd Amirul Hamrey Mohd Norshaney then completed the rout with the fourth goal of the game with a sublime effort in between two defenders fort the well-deserved victory.

“Our game improved after we scored the opening goal in the first half. We didn’t get that many chances in the second half but we took them each time we got them,” said Najip I-Team head coach Johari Bungsu.

“Our finishing was good especially Azri and even our set pieces were alright.”