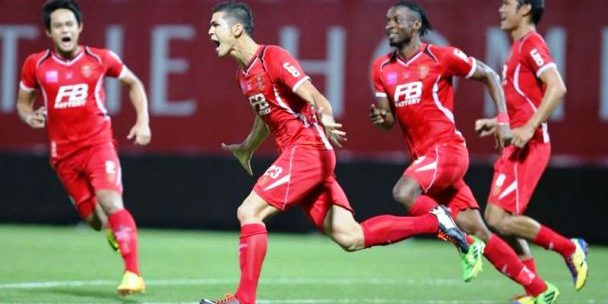 BANGKOK (23 June 2014) – A three-way battle is taking shape at the top of the Thailand Premier League (TPL) 2014 as Muang Thong United, BEC Tero Sasana and also Buriram United jostle for the full points heading into the final phase of the season.

Muang Thong beat Bangkok United 3-1 at the Thai-Japan stadium with veteran Datsakorn Thonglao scoring a brace in the first half before Bangkok United pulled a goal back through Leandro Martins.

But Milan Bubalo guaranteed the three points for Muang Thong with the third goal right at the end for the north eastern side to pick up 39 points from 19 matches played.

In the meantime, second-placed BEC Tero Sasana were held to a 1-1 draw by Chiang Rai United at the Chalermprakiat Stadium.

It was Chiang Rai who scored first through Fernando Ferreira before Chanathip Songkrasin found the equalizer just after the restart, as BEC Tero remained just two points behind the leaders.

Buriram United also picked up the full points on the weekend when they beat Police United 2-0 while Osotspa M-150 Saraburi edged Army United 5-3 at the Rajamangala Stadium.