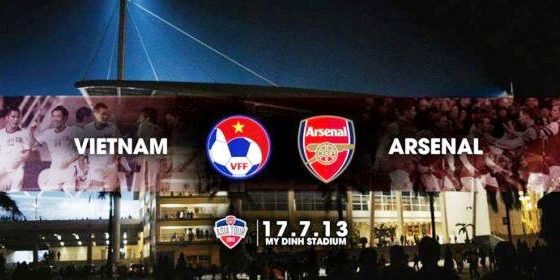 HANOI (17 July 2013) – English Premier League side Arsenal ran out 7-1 winners against Vietnam as Thailand conceded a 1-0 loss to Chelsea in exhibition matches held tonight across the region.

In the match that was played at the My Dinh National Stadium, the Gunners were once again on target through Olivier Giroud, barely five minutes into the sell-out tie. And with two minutes left of the first half, Giroud sprang a double for Arsenal to troop off comfortable 3-0 into the break.

Then it was Alex Oxlade-Chamberlain’s turn to find the back of the net a minute into the second half as teenager Chuba Akpom then got into the score sheet with a brace (56th and 59th minute) before Iqnasi Miquel added the seventh goal of the game in the 75th minute.

But while Vietnam managed to pull a goal back off Tran Manh Dung three minutes later, a red card on Nguyen Ngoc Thanh cast an even darker pall on the big defeat for the homesters.

The big win for Arsenal was their second in less than a week after routing Indonesia 7-0 in Jakarta the previous week.

IN THE MEANTIME, Thailand’s All-Stars’ hope of pulling a double on visiting English Premier League teams did not pan out as planned when they fell to a 1-0 loss to Chelsea at the Rajamangala National Stadium in Bangkok.

The only goal of the game came in the 34th minute off Romelu Lukaku’s spot kick as he sent Thai keeper Kritsana Klanklin the wrong way.