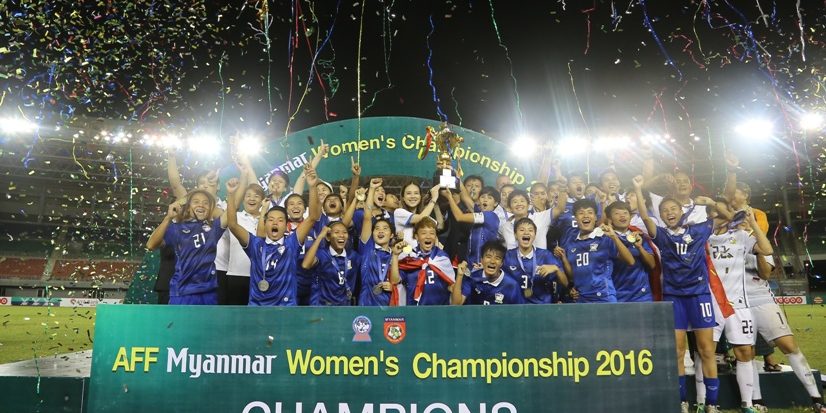 MANDALAY (4 August 2016) – It was an action-packed dramatic finale that ended with Thailand celebrating and Vietnam walking away in despair after coming so agonisingly close. Thailand retained the AFF Myanmar Women’s Championship title, but only after surviving a thrilling sudden death shootout which ended 6-5.

Vietnam, thanks to their persistence, had come from behind to level the score just five minutes from time to force the game into extratime. Thailand had taken the early lead through Rattikan Thongsombut in the 12th minute.

In the shootout, the score was tied at 3-3 after the mandatory five kicks. The sudden death kicks started and both sides were level until the fourth kick where Tran Thi Phuong Thao slammed her shot down the middle and it was saved by Waraporn Boonsing.

For Vietnam, it was a tough loss especially after their dramatic semi-final comeback the previous day when they equalised in extratime, forced the game into penalties, and went on to surprise hosts Myanmar.

In today’s final, Thailand surprised their rivals by snatching an early lead through Rattikan Thongsombut who deflected in a shot from Duangnapa Sritala. As a result, Vietnam’s game plan was out the door and they had to chase the Thais down to get the goals.

The Vietnamese players picked up the pace and began looking for breaches in their opponents defence. But the Thais stood strong with their goalkeeper Waraporn turning away all attempts that went her way.

With Vietnam calling the shots, Thailand were limited to counter-attacks which never really threatened their rivals. The script was very similar after the break with Vietnam taking the fight to their opponents. The Vietnam strikers were relentless in their search for the elusive goal. It was their fighting spirit and determination which eventually led to the equaliser.

With time running out and after hitting the post twice, Vietnam finally found the net through Nguyen Minh Thi Nguyet who nodded in a cross from Nguyen Thi Kuyen.

There was lots of action in extratime but none of the many attempts converted into goals, forcing the tie into the dreaded shootout.

Today’s match was the second involving the two teams in this tournament. In the group stage, Vietnam had surprised Thailand 2-0 to finish as the group winners.