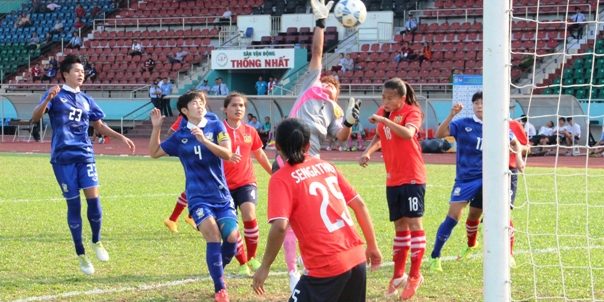 HO CHI MINH CITY (5 May 2015) – Thailand made the semi-finals of the  AFF Women’s Championship in style when they overwhelmed Laos 12-in their final game of Group A at the Thong Nhat Stadium.

It was the second time in two matches that Thailand have scored at least ten goals following their 10-1 defeat of Indonesia two days earlier.

And the performance against Laos and Indonesia was a far cry from their opening loss to the Australian Under-20 squad on 1 May.

“I did not expect to win by such a margin,” said Thai coach Nuengrutai Srathongvian. “I thought that we would win of course by just two or three goals.”

With the win, Thailand are currently placed top in Group A and will have to wait for the result between Australia and Indonesia in the second match of the day to see if they can continue to keep their place.