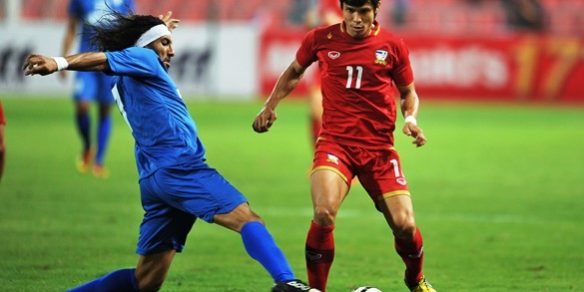 BANGKOK (6 Feb 2013) – The long crock list figured hard on Winfried Schaefer’s plans as Thailand fell to a 3-1 loss at home to Kuwait in their first game in Group B of the 2015 Asian Cup qualifiers tonight at the Rajamangala Stadium.

And after missing the services of three key midfielders including Datsakorn Thonglao and Adul Lasoh, the Thais could not have begun their campaign on the worse possible footing when defender Teerathon Bunmathan conceded an own goal early in the 24th minute.

The score at the end of the first half was 1-0 to the Kuwaitis.

The visitors from the Middles East then stepped on the gas to score two goals in the space of seven minutes – Hussain Fadhel (60th minute) and Hamad Aman (67th minute) – for them to be comfortable 3-0 in front.

Nippy attacking midfielder Chanatip Songkrasin pulled a goal back for Thailand in the 77th minute to give the home team some respite. But there was to be no way for back  for Thailand from this game as the score remained all the way to the end.

Thailand’s next match will be against Lebanon on 22 March 2013 at the Sports City Stadium in Beirut.

In the meantime, Habib Al Fardan denied Vietnam at least a point at home when he fired in the winner in the second half for the United Arab Emirates (UAE) to walk away with a 2-1 win in their first game in Group E at the My Dinh National Stadium in Hanoi.

A sixth minute penalty was converted by Ahmed Khalil to give the UAE the lead before Huynh Quoc Han drew level with the equaliser in the 59th minute. But Habib made sure of the win and the three points for the UAE with the winner on 67th minute.

Vietnam’s next opponent in the group will be against Hong Kong – who held Uzbekistan to a scoreless draw in Tashkent tonight – on 22 March at the Mongkok Stadium in Hong Kong.