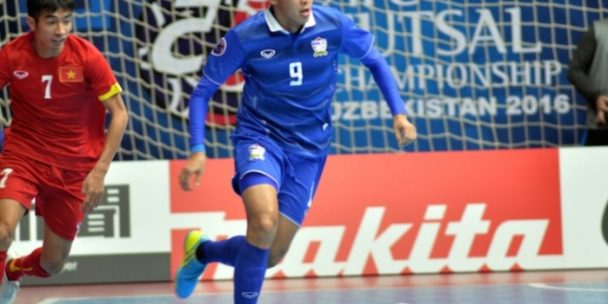 Suphawut’s four goals in the third place play-off at Uzbekistan Stadium took the 26-year-old to 14 for the tournament to overtake Iran’s Hossein Tayebi, who finished with 11 after failing to find the net in Sunday’s 2-1 win over Uzbekistan in the final.

“He is good enough to play anywhere in the world, but he prefers to stay in his home country,” said Thailand coach Victor Hermans.

“He went to Iran,but came back two months later.”Suphawut opened his tournament account with a treble in Thailand’s 5-4 opening win over Tajikistan in Group C before going on to net a brace in the 7-2 victory over Chinese Taipei.

And Suphawut then scored all three goals, including two last-minute strikes, as Thailand secured a 3-1 win over Vietnam to top the table.

Another double helped Thailand cruise to a 6-1 quarter-final victory over Australia, although Suphawut failed to find the net for the only time as Hermans’ side were edged out on penalties by Uzbekistan in the semi-finals following a 2-2 draw after extra-time.

But Suphawut’s four strikes on the final day of the tournament ensured Thailand finished third ahead of their FIFA Futsal World Cup appearance later this year in Colombia.