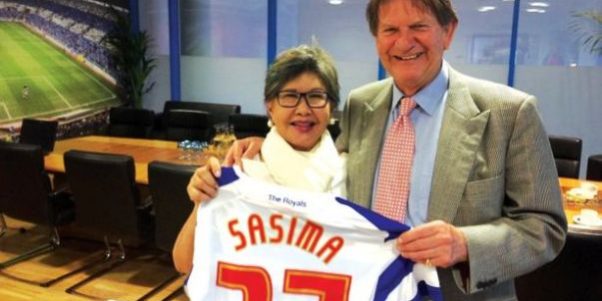 BANGKOK (2 August 2014) – A Thai consortium led by 76-year-old Thai businesswoman Khunying Sasima Srivikorn have gone into a ‘partnership’ with English side Reading FC.

“I am delighted with these developments and would like to officially welcome Khunying Sasima to Reading Football Club. The club were not intending to make any comment until all the formalities had been completed, but for the sake of clarity we believe it is in everyone’s interest to release this statement now,” said Reading chairman Sir John Madejski.

“Upon the completion of all the necessary procedures we will, of course, update everyone further, and in the meantime I am sure you share my excitement at the possibilities ahead.”

Khunying Sasima insisted that the formalities are still to be completed.

“I am absolutely delighted to be entering into this partnership with Sir John, and working with a club with such a strong reputation. My fellow investors and I look forward to supporting Sir John and working toward a successful future together.

“We still have some formalities to complete and plenty of work ahead of us – but we are excited about what lies ahead.”

Other members of the consortium include 39-year-old Samrit Bunditkitsada and Malaysian businessman Robert Tan.

Bunditkitsada is the owner of Thai Premier League football team Police United FC and Tan, 72, is a highly successful Malaysian tycoon who built IGB Corp Berhad into one of Malaysia’s largest landlords.