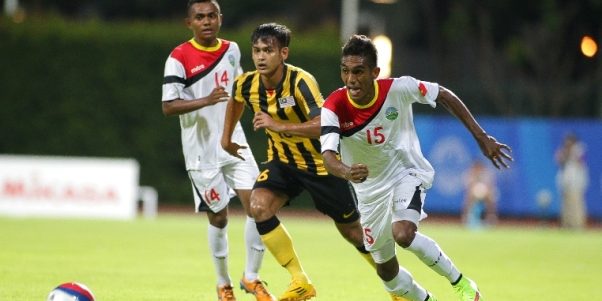 SINGAPORE (30 May 2015) – Ten-man Malaysia had to survive some harrowing moments in the second half before they were able to beat a resilient Timor Leste side 1-0 on the second matchday of Group B of the men’s football event here at the Bishan Stadium.

A moment of madness in the 32nd minute when Malaysian midfielder Muhammad Nazmi Faiz Mansor was alleged to have spat at Timor defender Filipe Oliveira left Singapore referee Foo Chuan Hin with little choice but to take out the first red card of the competition.

“I have not seen the tape but if it is true of what he had done then I cannot defend him,” said Malaysian coach Datuk Ong Kim Swee afterwards. “His red card hurt the team and that is unacceptable.”

Had it not been for the early goal in the 11th minute when D. Saarvindran struck home from the far post off a cross from Muhammad Abu Hassan Saari, the game could have ended in a stalemate.

The Malaysians were full of vigour and attacked from the get go, but they seem to have problem breaking into the last quarter.

Shortly after taking the lead, Malaysia had a great chance to double the advantage but in spite of having only Timor keeper Ramos Maxanches to beat, striker Muhammad Syafiq Ahmad just could not find his way through.

The red card then changed the pace of the game as Malaysia had little choice but to defend in numbers and look for chances to go forward.

They stayed to their altered game plan all way into the second half as Timor just can’t seem to take advantage of their numerical superiority.

Malaysia’s best chance after the break came in the 73rd minute when Mohamad Amer Saidin headed in the corner from S. Kumaahran, but the ball bounced off the crossbar instead.

Then came the double freekicks that were well executed by captain Anggisu Barbosa with a stiff grounder to the edge of the Malaysian goal that were well anticipated by keeper Mohd Farhan Abu Bakar.

“We know the quality of the Malaysians,” said Timor coach Fabio Da Silva. “We know how they play and Timor are still some way off. When they got the red card, they changed tactics to make it hard for us to break them.”