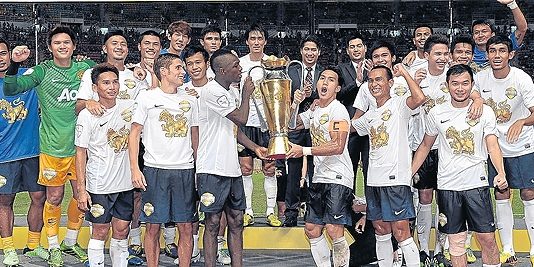 BANGKOK (15 July 2013) – Veteran striker Teerathep Winothai’s strike just four minutes after the break gave Thailand’s All Stars side a well-deserved 1-0 win over visiting Manchester United at the Rajamangala Stadium on the weekend.

The loss was David Moyes’ first match in charge of the defending English Premier League champions.

When asked if he thought the surprise loss was a bad omen, Moyes replied: “I hope not! If I’m going to lose any games I’m happy to lose these ones. It’s pre-season.”

Countered Thai coach Piyapong Pue-on: “Manchester United are a strong team. But they are in the pre-season and have only got together for a few days. Our players looked fitter physically.”

Thailand All Stars will play Chelsea in two days.