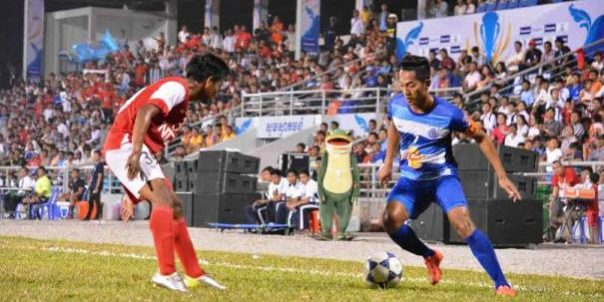 PHNOM PENH (13 Feb 2015) – Svay Rieng will be chasing for their third Hun Sen Cup crown when they take on NagaWorld in the final that will be played this weekend.

Svay Rieng edged TriAsia 2-0 in the semi-finals while NagaWorld had to battle for more than 120 minutes before they were able to beat defending champions National Police Commissary on penalties.

The 2011 and 2012 champions Svay Rieng, were in confident mood all throughout the competition and by the time, Prak Mony Odom fired in the lead before the break, the game was well and over as Prak Mony then finished things off with the second right at the death.

On the other hand, NagaWorld were made to sweat well beyond the regulatory 90 minutes before Teab Vathanak capitalized on several misses from National Police to give themselves a well-deserved 3-1 win on penalties.