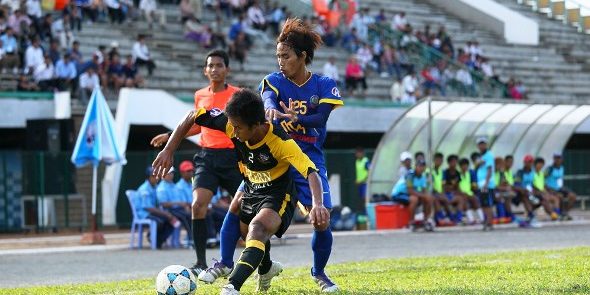 An own goal from Chhun Mesa in the 17th minute was hardly the start Senate could have hoped for against the undefeated Boueng Ket but by the half hour mark, they fell further behind when Chan Vathanaka struck the first of his two goals in the afternoon.

Five minutes before the break, Keo Sokpheng put Boueng Ket comfortable at 3-0 in front as Chan then completed his brace with another goal on 71 minute.

For Svay Rieng, two goals in the second half were enough for them to steal the full points over Build Bright with Samouern Pidor giving them the lead in the 66th minute as veteran Khoun Laboravy then added the second goal in injury time.

Build Bright were just a tad late in a comeback despite scoring their first goal of the game through Prum Putsithy moments later.

In the meantime, former champions Phnom Penh Crown improved to third from fourth with a commanding 3-0 win over National Police. Ly Hanuol giving the lead on 27 minute, as Odion Anthony Obadin and Choi Jae Choel then added the second and third goal in the 68th and 90th minute respectively.

Elsewhere, Naga Corp FC were held to a 1-1 draw by National Defense Ministry while Kirivong Sok scored a 4-2 win over Asia Euro University.