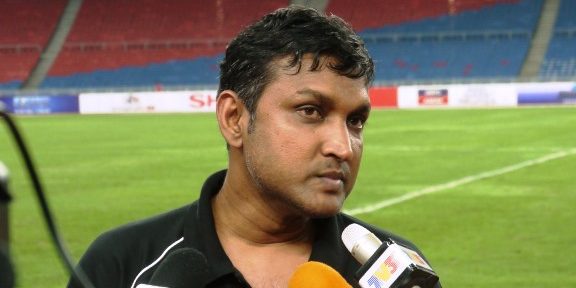 SINGAPORE (22 Jan 2013) – The FA of Singapore (FAS) have appointed V. Sundramoorthy as their caretaker coach for the upcoming AFC Asian Cup 2015 qualifying match between Singapore and Jordan.

His appointment came after the departure of Radojko Avramovic who decided against renewing his contract despite leading the Lions to their fourth ASEAN crown last month.

Sundram is also the chief coach of the LIONSXII team playing in the Malaysian Super League.

“After due consideration, we have decided to appoint Sundram as the caretaker coach and lead the Lions during the upcoming Asian Cup 2015 qualifying match against Jordan,” said FAS President Zainudin Nordin.

“Having worked with Raddy and our national age-group squads in recent years, Sundram has the relevant experience and I am confident that the Lions will be in good hands. FAS will support Sundram and his team, which includes a goalkeeping coach, fitness trainer and physiotherapists, to the best of our abilities as they strive to put up a good performance against a strong Jordan side.

“While the upcoming Asian Cup qualifier is important, we must look at the longer-term strategy and objectives of Singapore football as well. We have the SEA Games in December, the AFF Suzuki Cup in 2014 and then the Asian Qualifiers for the 2016 Olympic football tournament and SEA Games in the following year. As a forward-looking organisation, we need to ensure that we have the platform and right personnel to achieve our long-term goals.”

Added Sundram: “It is a great honour to have been approached by FAS to be the caretaker coach of the national team and I look forward with eager anticipation to the upcoming match. I am now discussing with the backroom team and staff the composition of the squad for the Singapore vs Jordan match and I hope to finalise the names before the end of this week.”

Singapore are in Group A against Jordan, Syria and Oman for the 2015 AFC Asian Cup qualifiers. They will play against Jordan away on 6 February.