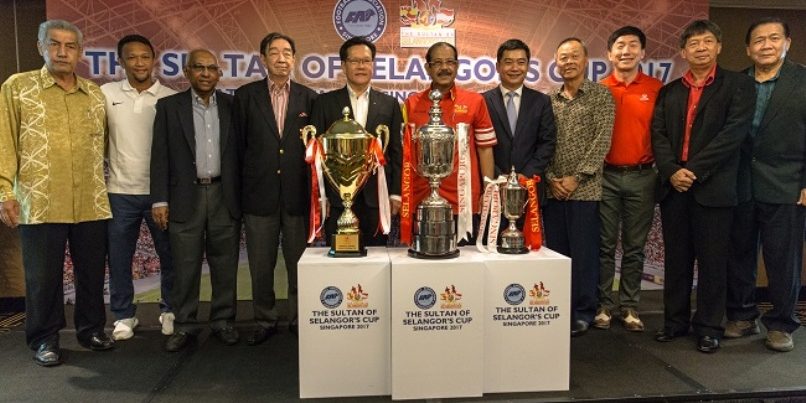 SINGAPORE (19 March 2017) – The Organising Committee of The Sultan of Selangor’s Cup (TSSC) 2017 today announced that the 16th edition of the friendly tournament, to be held on 6 May 2017, will include a new ‘Singapore-Selangor Schools Challenge Cup’ match between the Under-16 boys of the Singapore Sports School and a Selangor Combined Schools team.

All three matches will take place at the iconic National Stadium @ Singapore Sports Hub, marking Singapore’s hosting of the series for the first time since 2009.

Lim Kia Tong, President of the Football Association of Singapore (FAS) Provisional Council, said: “We have been working hard with our partners to increase the vibrancy of local football and bring the Kallang Roar back.

Football is a unique sport that brings together people from all walks of life to cheer as one – The Sultan of Selangor’s Cup is one such avenue, as it highlights the historical friendly rivalry between Singapore and Selangor. We look forward to welcoming the Selangor players and fans to Singapore, and three exciting matches for fans to enjoy.”

Teo Hock Seng, Group Managing Director of Komoco Motors Pte Ltd and Co-Chairman of The Sultan of Selangor’s Cup, said: “The addition of the inaugural Singapore-Selangor Schools Challenge Cup match is to include and involve the youth who are our future, and will further strengthen and ensure continuity in the traditional ties between Singapore and Selangor through football.”

“I would like to thank Football Association of Singapore and Singapore Sports Hub for making this event at the National Stadium possible, and we hope the fans from both sides of the Causeway will enjoy an evening of entertaining and exciting football in the true spirit and sporting rivalry between Singapore and Selangor.”

Said Manu Sawhney, CEO, Singapore Sports Hub: “We are excited to host the 2017 Sultan of Selangor’s Cup, which returns to Singapore for the first time in eight years. From the FAS Women’s Challenge Cup in December 2016, to the recently held Great Eastern Community Shield, upcoming International Champions Cup in July, and now the Sultan of Selangor’s Cup, we continue building our football programming, and offering sports fans even more choice of events at the Singapore Sports Hub. This May, we look forward to welcoming the two most successful sides in Malaysia Cup history to play in the National Stadium; football fans from Singapore and abroad for a taste of classic football rivalry; and hearing the Kallang Roar once more.”
SCHEDULE OF MATCHES

* Concession tickets are applicable to Students aged 4 to 16, and Senior Citizens aged 60 and above. Children aged 4 and above must purchase a ticket for admission. Infant in arms and children under 4 years of age may be admitted free of charge provided they do not occupy a seat.