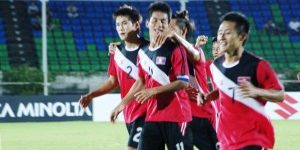 BANGKOK (10 April 2011) – HRH Sultan Haji Ahmad Shah is the new
President of the Asean Football Federation (AFF) after he won the post
uncontested during the regional body’s 18th Congress held at a leading
hotel here today.

FA of Thailand President, Dato’ Worawi Makudi, who is also a FIFA Exco member, decided to withdraw from contesting the top post today.

Tengku Ahmad has been AFF President since 1996 (when the AFF was
revived) and has played a major part in AFF’s tremendous success over
the years which includes the hosting of the immensely popular regional
football tournament now known as the AFF Suzuki Cup.

In his inauguration speech today, HRH Sultan Ahmad thanked Tengku
Ahmad Rithaudeen for his leadership. “I hope to lead the management
team to further enhance the solidarity and level of Asean football. It
is indeed fitting for all of us to render our appreciation to Tengku
Tan Sri Ahmad Rithauddeen who served as president for five terms since
1996.

HRH Sultan Ahmad went on to comment:” I urge all members of the AFF to
maintain and enhance the strong sustainable solidarity that has been
well established. Only with a strong foundation can we further enhance
the capacity, quality and capability of football.

During the Congress, three new Vice-Presidents were voted in. They
were Brig Gen Khiev Sameth from Cambodia, Francisco Kabualdi Lay from
Timor Leste and Viphet Sihachakr from Laos. Pengiran Matusin Matasan
from Brunei and Ravy Khek did not seek re-election.

Prior to the elections today, members attending the Congress had
agreed to consider a rotation format for future elections. The details
and implementation are to be discussed by the new AFF Council.

Tengku Ahmad, in his parting words, thanked the members for their
support over the years. “I have enjoyed working with all of you and
wish the new office bearers the very best.” He was later appointed the
Honorary President of the AFF.

Earlier this morning, HRH Prince Ali bin Al Hussein, FIFA
Vice-President, addressed the Congress and expressed his desire to
work closely with the AFF and to protect the members’ interests.

“As your representative in FIFA, I am ready to work with you and I promise
to uphold your rights and challenge those who don’t.”

Just before the first AFF Council Meeting for session 2011/2015
concluded, the members of the Council were given a presentation by the
ASEAN secretariat on the possibility of hosting the 2030 World Cup.

Malaysian Youth and Sports Minister, Datuk Razali Ibrahim, led the
delegation which made the presentation to the AFF Council. HRH Sultan
Ahmad later proposed that a committee was formed by the AFF to look
into the bid proposal and work closely with the ASEAN secretariat.