Stephen as New Brunei U16 Coach 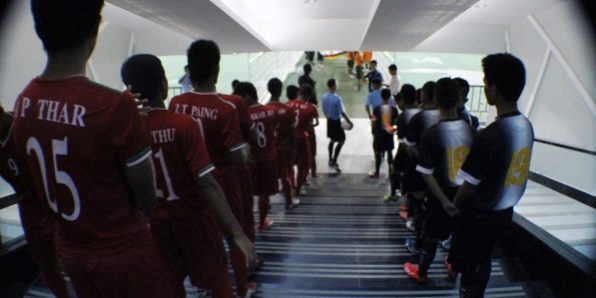 BANDAR SERI BEGAWAN (8 Sept 2013) – Stephen Ng of Singapore has been named as the new coach of the Brunei Under-16 team following their uninspiring performance at the AFF AYA Bank U16 Championship which concluded last week in Naypyitaw, Myanmar.

Brunei finished the tournament at the bottom of Group A, losing all four of their matches and conceding 43 goals. They did not even manage to score even a single goal throughout their campaign.

In a statement, the National FA of Brunei Darussalam (NFABD) stated that coach Awang Ali Ismail has resigned from his post whereby Stephen Ng will now take over for the team’s campaign in the Asian Football Confederation (AFC) U16 qualifiers on 21-29 September in Laos.

PHOTO: Brunei (in all black kit on the right) before their match against hosts Myanmar (in all red kit on the left) at the recent AFF AYA Bank Under-16 Championship in Naypyitaw, Myanmar