Stalemates give Kedah and JDT away goal advantage 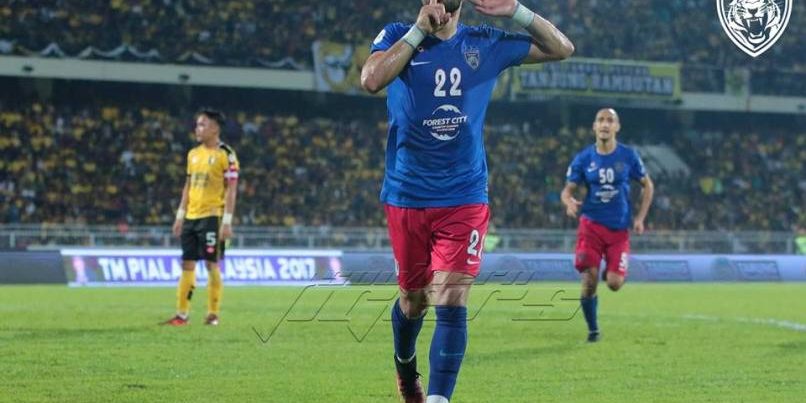 IPOH (16 October 2017) – It was a night of blunders by defenders at the Perak Stadium in Ipoh as Perak and Johor Darul Takzim (JDT) battled to a 1-1 draw while Felda United snatched a late equaliser for a 1-1 draw against defending champions Kedah at the Tun Abdul Razak Stadium in Jengka in the first-leg Malaysia Cup semi-finals on Sunday.

The stalemates at both venues give Kedah and JDT an away goal advantage for next week’s return-leg encounters at the Darulaman Stadium in Alor Setar and Johor Bahru’s Larkin Stadium on Oct 21.

Four-time Malaysian Super League champions JDT, whose last trip to Ipoh ended in a 2-1 defeat, were one goal down as early as the 18th minute. JDT defender Hasbullah Abu Bakar gave Perak the lead when he put the ball into his own net while trying to clear a harmless cross.

Hasbullah put his foot to the ball while trying to clear a cross from Gilmar Filho to Zaquan Adha Abdul Radzak, catching his goalkeeper Izham Tarmizi Roslan on the wrong foot inside the box. Izham could only watch in despair as the ball rolled into the far corner of the net to hand Perak a 1-0 lead.

In Jengka it was heartbreak for Kedah when substitute Hadin Azman popped in a header in the 87th minute from a corner by Wan Zack Haikal to cancel out Kedah’s 62nd minute lead.

The defending champions were in front from the penalty spot when Syazwan Zainon was felled inside the box by Safwan Hashim. Brazilian Sandro Mendoca made mistake from the spot to beat Felda keeper Farizal Harun.