SPL Referees Gearing Up for 2019 Season 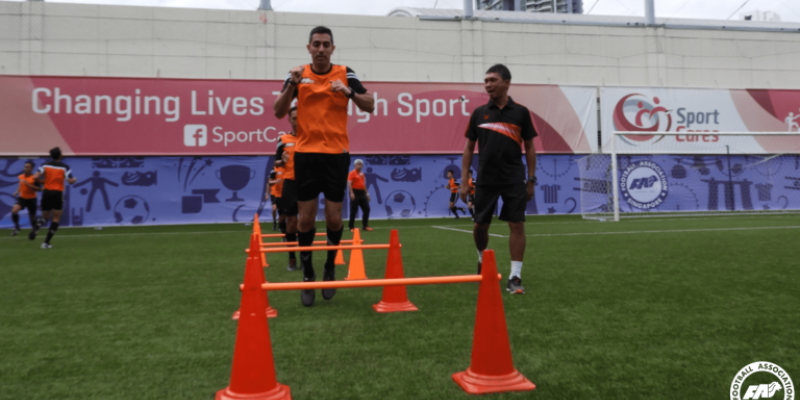 SINGAPORE (8 Feb 2019) – While the players are getting ready for the start of the football season, referees officiating in the 2019 Singapore Premier League (SPL) are also gearing up with the pre-season workshop organised by the FA of Singapore (FAS).

Held on 26 and 27 January at the Jalan Besar Stadium, the workshop is aimed at ensuring that referees, as enforcers of the Laws of the Game, are aligned in their understanding and interpretation of the Laws.

FAS Council member and Referees Committee Chairman Lim Tong Hai commented: “The officials are aware of their roles and responsibilities – this session is for them to reinforce their understanding and a good platform for them to clarify their queries, if any.”

He added: “It is also a great get-together before the commencement of the new SPL season as it provides an excellent opportunity for the incumbent and newly promoted referees to interact freely and to further understand the demands and rigor of an SPL official.”

Besides theory and practical sessions on the Laws of the Game, the workshop also touched on the soft skills that a referee should possess.

Nathan Chan Rong De, who has been officiating in the SPL for seven years, said: “Refereeing is not just about knowledge for the laws of the game and fitness, it is also about managing players and officials on and off the pitch. I believe that good communication skills will help referees gain the confidence of both players and officials and allow them to better enforce the laws of the game on the pitch.”

To ensure consistently high standards of refereeing in the league, the Referees Qualification Fitness Test – a compulsory pre-requisite test for referees in order to be selected for officiating duties in the 2019 SPL – was conducted earlier this month. Monthly training and analysis sessions will also be held during the season to review referees’ performances and identify areas of improvement.

On his expectations for the SPL referees this season, Lim remarked: “Fitness has always been a top priority. Officials will be able to make better informed decisions when they are fit, which in turn, will have an impact on the flow of the game. The onus is on all of us to upkeep the high standards, officials to maintain their own fitness and the referees’ department to assist whenever required.

“I appeal to all officials to exercise objective self and cross critique for their respective performance as this will help in achieving consistent officiating.”

The 2019 local football season will kick off on Saturday, 23 February with the Community Shield between Albirex Niigata (S) and Home United at Jalan Besar Stadium. The first SPL match will be played the following week between Geylang International and the White Swans at Our Tampines Hub on 2 March.