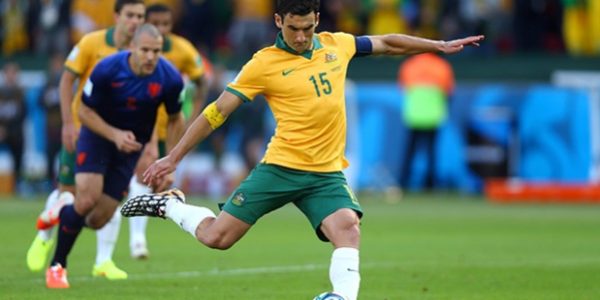 SYDNEY (21 June 2014) – Socceroo captain Mile Jedinak believes unsettling Spain is one of the keys to getting a famous result against the now former world champions on Monday (Tuesday 2am AEST).

The Socceroos meet Spain at the Arena da Baixada, Curitiba, this Monday with both nations already out of contention to progress from Group B of the World Cup.

But Australia’s eye-catching campaign could finish on a high with a result against the dispirited former world champions. And Jedinak senses another energetic in-your-face approach will help.

“Everyone knows what Spain is all about and how they play. We need to execute our game plan and unsettle them.

“We need to focus on ourselves but also the opposition. It is up to us to go out and enforce our game on them,” he said on Friday.

But the Crystal Palace skipper was adamant that two losses by Spain doesn’t change the quality of their side. World football’s pass masters still present an almighty challenge to the green and gold.

“The results from Spain have been surprising. Are they a bad team? Absolutely not. They are one of the best ever,” he said.

The Socceroos left Vitoria on Friday afternoon bound for Curitiba after training at their home base.

“There is a game in a few days time and that is our remaining focus. All of our energy is going into the game.

“We are disappointed the way the results have panned out. We know we will have to be at 100% to beat Spain,” Jedinak said.

The Socceroo skipper added since the Dutch game in Porto Alegre most of the training has been light with recovery the main focus.

Much of the planning for the Spain game had already been done by coach Ange Postecoglou’s meticulous coaching staff.

He hinted playmaker Mark Bresciano might still play a part in the game, saying the Al Gharafa talisman had been working hard to “get himself right”.

Bresciano was subbed off after 50 minutes against Holland.  His replacement, Oliver Bozanic caught the eye after winning a second half penalty – which Jedinak converted to give Australia a 2-1 lead – and slotting in well to the Socceroos’ game plan.

“I am comfortable playing 10, but ultimately it’s up to the boss. I just need to keep working hard,” said Bozanic. “I have had one season in Europe and now I am at the World Cup. It is an amazing feeling.

“It is good to see that so many people now believe in us. We hope to make this out best game of the tournament.”

Jedinak is also eying a big send off with this final game for the Australians.

“Being the captain has been a huge honour. It has been a pleasure being around the boys, we are in this together.

“The atmosphere at the game [against Holland] was incredible. The national anthem was unbelievable. I will never forget it.”

And Jedinak revealed he’d received support from London while he’d been leading his nation on this journey.

“I have got a text from one if the owners at Palace, which is nice, but I am 100% focussed on the job ahead.”