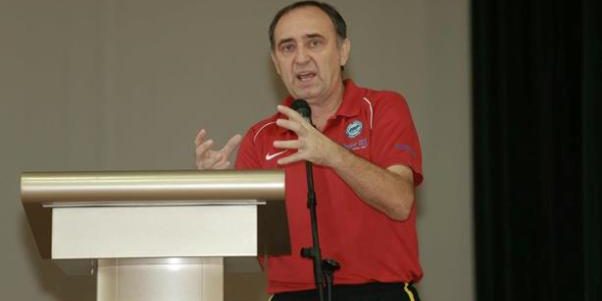 SINGAPORE (17 Sept 2014) – The FA of Singapore (FAS) have announced the resignation of Slobodan Pavkovic as their Technical Director.

Slobodan first joined the FAS in April 2008 as Technical Director, and has been working with his colleagues to reform and enhance the youth development structure and programmes, including the National Football Academy and Junior Centres of Excellence.

Apart from youth development, Slobodan was also involved in the promotion of other aspects of Singapore football, including women’s football, grassroots and coach education. During his tenure, he also mentored and guided our coaches and teams at key competitions, including the 2010 Youth Olympic Games campaign, 2011 S.League and the Southeast Asian (SEA) Games and 2013 Asian Youth Games.

Slobodan, 58, said: “Through the hard work and commitment of the management and colleagues, as well as the re-prioritisation of our limited resources, FAS has put in place a strong youth development structure and programmes which have been endorsed by FIFA and many international football officials and associations.

“Personally, I am deeply heartened by the development of our players who have progressed through our youth development system. The likes of Adam Swandi and Irfan Fandi Ahmad are among those whose potential and performances at international competitions such as the Lion City Cup have been singled out for praise by foreign football coaches and officials. It is also notable that our NFA teams have done well in recent editions of the Lion City Cup, where they defeated teams from top European and South American clubs.

“Over the years, many players including Harriss Harun, Safuwan Baharudin and Iqbal Hussain have progressed from the NFA age-groups to the senior national team and have also caught the attention of foreign coaches and scouts. We have a good pool of talented and intelligent players and I firmly believe that more will be presented with the opportunity to play overseas if we receive more support and resources to send our players to play more top-level international matches and also to train at quality facilities and pitches.

“I have enjoyed working for the FAS and while it has been a rewarding journey, I believe it is time for me to embark on a new challenge – possibly with clubs either in Singapore or the region. This has been a very difficult decision to make as I have been very happy throughout my employment at FAS, which is today recognised by many as one of the top member associations in Asia.

“I am grateful to FAS President Zainudin Nordin and General Secretary Winston Lee for the support, guidance and numerous opportunities that they have provided me during the last several years. I would also like to thank the stakeholders including the S.League clubs, Singapore Sports School, sponsors, media and the fans for their well-wishes and support.

“I have enjoyed my tenure with the Association and I wish FAS all the very best. Given the strong level of support and commitment from the management, I am certain that our youth development system will continue to develop many excellent youth players in the coming years – though it is important for us to secure the necessary level of resources.”

FAS President Zainudin Nordin said: “We respect Slobodan’s decision to pursue other opportunities. Slobodan has, in recent years, been working closely with his colleagues to implement key programmes aimed at facilitating the development of footballers from a young age. These include the launch of the revamped Clubs Centres of Excellence and the introduction of the Junior Centres of Excellence programmes as well as the National Football Syllabus which serves as a guide for coaches in Singapore.

“The endorsement of our youth development structure and programmes by senior international football officials would not have been possible without the commitment and hard work of our colleagues including Slobodan. We would like to thank Slobodan for his contributions to both the Association and local football, and we wish him well in his future endeavours.”

FAS have commenced the search to identify and shortlist qualified candidates, and will make a further announcement in due course.