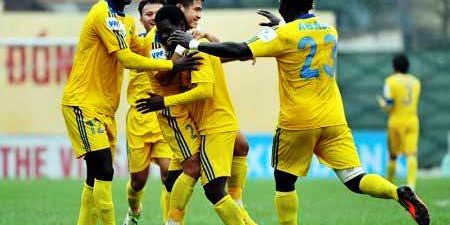 HANOI (15 April 2012) – Despite failing to pick up the full points on the weekend, Song Lam Nghe An (SLNA) still lead the V-League 2013 standings. SLNA were held to a 2-2 draw on the road by Hanoi T&T at the Hang Day Stadium.

Just eight minutes in, SLNA went in front of Trong Hoang before Argentine striker Gonzalo Damian Marronkle struck twice in the 67th and 79th minute for Hanoi to take a 2-1 lead.

But Hector Kevin’s strike with two minutes remaining of the tie made sure SLNA pick up at least a point for them to be at the top of the table with ten points from four matches played thus far.

In the meantime, Dong Nai were held to a 2-2 draw at home by former champions Hoang Anh Gia Lai (HAGL), courtesy of a double from Cameroonian Vietnamese center back Le Hoang Phat Thierry.