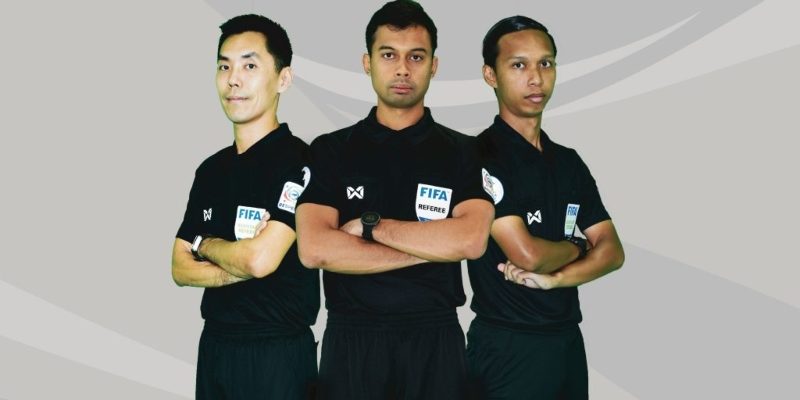 SINGAPORE (15 May 2019) – The FA of Singapore (FAS) are pleased to announce that three local FIFA referees have been appointed to officiate at the 2019 FIFA Under-20 World Cup in Poland.

The trio of Muhammad Taqi Aljaafari, Ronnie Koh and Abdul Hannan will represent Singapore at the 22nd edition of the biennial tournament, which will be held from 23 May to 15 June.

The news was broken to the three officials in March by FAS President Lim Kia Tong, with FAS General Secretary Yazeen Buhari and FAS Head of Referees Nazeer Hussain in attendance.

KiatTong said: “We are extremely delighted and proud that three match officials from Singapore have been selected to officiate in this prestigious FIFA tournament. Knowing the stringent criteria and standard set by FIFA for selection, the trio of Taqi, Ronnie and Hannan have proven that our top referees can be on par with the world’s best.

As part of the lead-up to the assignment, Muhammad Taqi recently took charge of Chinese Super League (CSL) matches between Shandong Luneng and Wuhan Zall on 28 April, and Shanghai SIPG against Guangzhou R&F on 4 May.

“In preparing Taqi for his duties as the main referee in Poland, he was given two brilliant opportunities to referee VAR-controlled matches in the CSL courtesy of the China FA President and Vice Sports Minister, Du Zhaocai,” said Kia Tong.

“We are very confident that Taqi, Ronnie and Hannan will acquit themselves with distinction at the tournament in Poland and fly the Singapore flag high.”

The appointment came as a “pleasant surprise” for Hannan, who is only into his third year of refereeing and will be making his debut at a FIFA tournament.

The 28-year-old was among the match officials at last year’s Asian Football Confederation (AFC) U16 Championship in Malaysia, while he was also an official at the ASEAN Football Federation (AFF) Suzuki Cup 2018 first-leg semi-final between Malaysia and Thailand. Along with Koh, both served as assistants to Taqi in an international friendly between Japan and Costa Rica last September.

“Actually, I’m very surprised because there are other FIFA referees in Singapore who are much more experienced,” Hannan told FAS.org.sg. “I hope to justify this appointment by training and preparing well for it.”

It is the second time in a row that Taqi and Koh will be officiating together at a FIFA tournament, having both been to the 2017 FIFA U17 World Cup alongside Edwin Lee as a trio – a first for a Singaporean trio then. Both also officiated together as the Asian Football Confederation (AFC) Asian Cup 2019 earlier this January and Koh is delighted to get another opportunity to be at a FIFA tournament.

“It is not easy to get into such tournaments so we should be extremely happy, honoured and humbled by this appointment,” said the 40-year-old, who has been an international referee since 2012. “Refereeing is now about teamwork, not about one man; if one fails, all fail. I am looking forward to it and the most important thing is to prepare well; the hard work starts now.”

Taqi described himself as “thrilled and motivated” at the opportunity to officiate at his third U-20 tournament and is looking forward to working with the other two.

“The preparation has been excellent for us and the support we have received from the Referees’ Department and FAS have been terrific,” said the 32-year-old, who recently took charge of the 2019 Asian Football Confederation (AFC) Champions League match between Al-Rayyan and Al-Ittihad – his third ACL assignment this season.

“With it being Hannan’s first FIFA tournament, I will definitely do my best to mentor him and emphasise the importance of being both mentally and physically focused throughout the competition. With the implementation of VAR in the competition, all three of us have to work together to ensure good performances and synergy on and off the field.”

The Football Association of Singapore congratulates Taqi, Ronnie and Hannan and wishes them all the best for their assignments. – www.fas.org.sg/