Singapore U23 to Focus on Camaraderie 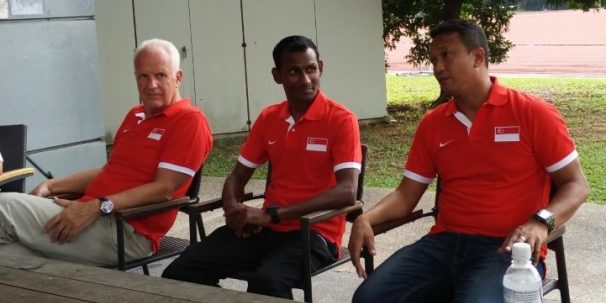 SINGAPORE (28 April 2015) – Singapore national Under-23 Head Coach Aide Iskandar, LionsXII Head Coach Fandi Ahmad and National Coach Bernd Stange have unanimously agreed on two moves in the coming weeks to ensure that the Young Lions will be as best prepared for the SEA Games next month.

They have decided that defender Zakir Samsudin, wingers Faris Ramli and Christopher van Huizen and striker Sahil Suhaimi will be made available for the LionsXII’s Malaysia FA Cup semi-final first-leg match against Terengganu on 9 May at Jalan Besar Stadium, as well as the FA Cup Final in Kuala Lumpur on 23 May if the Lions XII qualify.

Zakir, Faris, Sahil and van Huizen will book out from the Sports School on 7 May to join the LionsXII for training.

After the 9 May game, the four boys will fly off with the Young Lions to Japan on 10 May.

Said Aide: “Coach Bernd, Fandi and I had an in-depth discussion about our SEA Games preparations.  All of us agree that it would be a good psychological boost for the four if they can play in the FA Cup semi-final and final, if the LionsXII qualify.

“We also agreed that the four boys will train with the Young Lions in Japan.”

Fandi said: “I am happy to be able to contribute to the SEA Games campaign in this way. We know how important team spirit is. As former players, Aide and I know what it feels like to be part of good Cup runs, and what it means to players. They will get some game time and the chance to soak in the big-match atmosphere. This experience will be invaluable, and will give them a good boost for the SEA Games.”

Secondly, to boost team spirit and camaraderie, Aide has decided to bring the Young Lions to Jalan Besar Stadium on 9 May to cheer on the LionsXII.

“An important element that we are focusing on during this period of centralised training is team bonding, so we want the Young Lions to go down to Jalan Besar to support both their four teammates as well as the LionsXII,” explained Aide.

Fandi said: “It was a good suggestion by Aide. I think the four boys and the team will get a huge boost from such strong support.”

When asked if he feared the boys being injured while playing for the LionsXII, Aide said: “Injuries can happen anywhere and at any time. Players get injured at training, during matches, and even outside.

“Afiq Yunos was injured while on national duty, while Fandi himself was injured in a freak accident in 1994 when he was pierced by a protruding piece of metal in the seat in the team coach.”