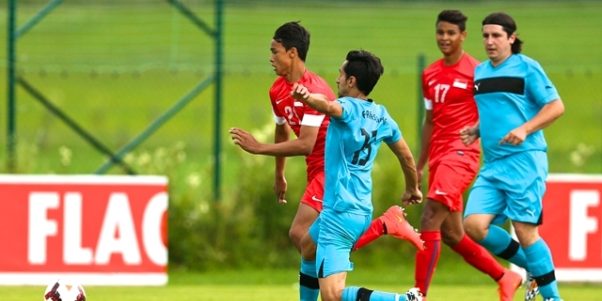 SINGAPORE (22 July 2014) – The Singapore Under-23 team picked up their first win in their third and final match tour of Austria when they beat German amateur club TSV Freilassing 5-0.

The team had earlier fell to a 6-1 loss to Czech First Division FC Pribram and then a 5-0 defeat at the hands of Bundeliga side Borussia Dortmund U23 squad.

Against TSV Freilassing, the young Lions found it a little easier when Iqbal Hussain opened account early in the second minute before Shameer Aziq doubled Singapore’s advantage in the tenth minute.

Iqbal then nailed his second of the game and Singapore’s third in the 12th minute as TSV Freilassing back-pedalled to stem the onslaught well into the second-half..

Muhaimin Suhaimi then finally added goal No. 4 in the 59th minute before Ikhsan Fandi finished things off with the last goal of the game seven minutes to the end.

“I think it was a good game for the boys. Everybody got a chance to play, which is important especially when you go on a tour like this. We started very well, but slowed down after the first 20 minutes or so,” said coach S. Subramani after the match.

“If we continued playing that way the entire game, we could have had an even better result, but I am pleased because everybody got the opportunity to play,”