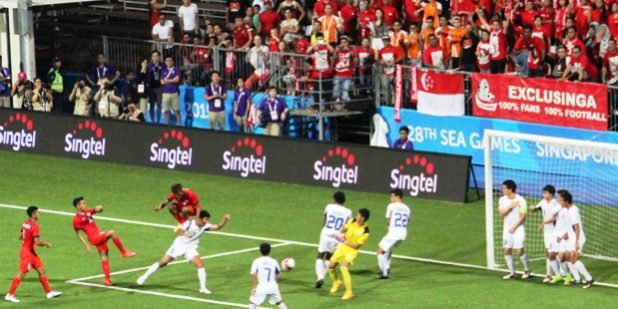 SINGAPORE (1 June 2015) – After the smashing start to the SEA Games where a total of twelve goals were scored on the first day, reality came a-knockin’ when hosts Singapore could only beat the Philippines 1-0 at the Jalan Besar Stadium as did Thailand do the same against Timor Leste across town at the Bishan Stadium.

Singapore playing in their first match of Group A had all the ingredients they could have wished for – quality players, vociferous fans at the stand and also the ability to create goal- scoring opportunities.

But in the end, all that they could muster was that one goal from defender Sheikh Abdul Hadi Sheikh Othman who nodded home the freekick from Safirul Sulaiman just before the break.

“The three points calmed the nerves,” said Singapore coach Aide Iskandar. “We created chances after chances but we just could not score. But the more important thing is that we got the three points.”

The young Lions side came into the tie full of confidence as the pre-match hype pumped up the enthusiasm even further.

But with Stanley Ng firing straight into the arms of Philippines keeper Florencio Badelic with the early chance, it signals that it will be a long night for the hosts.

Philippines put men behind the ball and were looking for the chances to go forward but with the defenders making silly passes in dangerous areas, it was always going to be a struggle.

And with striker Paolo Salenga missing a golden opportunity to give the Philippines the lead after 18 minutes, it gave the initiative for Singapore to carve their name onto the score sheet.

With seconds remaining of the first half, Sheikh Abdul Hadi headed in the freekick from the right to push the fans to their feet.

The Philippines could do no better in the second half as while they do pass the ball around really well and kept possession, they just can’t seem to find their way through Singapore custodian Muhammad Syazwan Buhari.

As Mohammad Sahil Suhaimi missed another sitter in the 65th minute, the frustration began to grew as the game then turned physical. And under synthetic conditions at the Jalan Besar Stadium, the exchanges were amplified several folds with often clumsy challenges.

“It was unfortunate that we conceded the goal just before the break,” added Philippines coach Marlon Maro. “We trained to keep ball possession since we know that the field will be synthetic.

“We learned some things from this game which we could use for our next match.”

In the meantime at the Jalan Besar Stadium, defending champions Thailand could only muster a slim 1-0 win over Timor Leste.

It was slim pickings for the 14-times champions of the SEA Games where they could only find the back of the net once in the 44th minute through Rungrat Phumichantuk.

The win allowed Thailand to stay top of Group A with six points following their 6-0 beating of Laos in their first match.