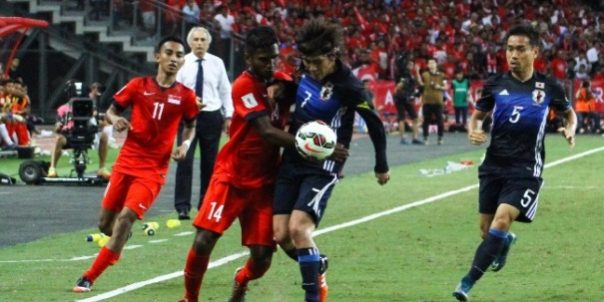 This is Singapore’s second loss of the campaign, and the Lions will need a win against Syria next Tuesday in order to keep alive their hopes of qualifying automatically for the next round of World Cup qualification and the 2019 Asian Cup.

Japan coach Vahid Halihodzic had said that his team was gunning for revenge after the Lions held them to a 0-0 draw back in the reverse fixture, and they went on the offensive right from the go.

The Samurai Blue went ahead in the 20th minute through a sublime effort by Mu Kanazaki. Chesting the ball down, the forward took a shot on the turn and volleyed it into the top corner.

Honda was denied by Izwan again minutes later but a deflection helped him beat the goalkeeper in the 26th minute to give them a two-goal lead when half-time came.

The Lions thought Nazrul Nazari had come to their rescue with a goal-line clearance, but Yoshida managed to divert Usami Takashi’s shot into goal to make it 3-0.

Singapore will now have five days until their next match against Syria at the National Stadium on 17 November.

In the meantime, Korea Republic tightened their grip at the top of Group G on Thursday as a 4-0 win over Myanmar saw the Taeguk Warriors register a fifth straight FIFA World Cup 2018/AFC Asian Cup 2019 joint-qualifying win.

Two goals in either half at the Suwon World Cup Stadium helped Uli Stielike’s charges edge ever closer to a spot at Asia’s next continental gathering in the UAE and the final round of qualifying for the global extravaganza in Russia.

Roared on by a vocal crowd, the Koreans started brightly and should have taken the lead with only eight minutes on the clock had Kwak Tae-hwi not directed a close range header into the arms of a relieved Kyaw Zin Phyo in the Myanmar goal.

The home faithful did not have to wait too long however before the breakthrough came, Lee Jae-sung collecting the ball neatly on his chest and rifling the ball home on 18 minutes.

The 2015 AFC Asian Cup runners-up should have extended their lead shortly after, but Jang Hyun-soo struck his 23rd minute penalty against the upright following Ko Ko Thein’s foul on Hwang Ui-jo in the area.

Much to Jang’s relief, Koo Ja-cheol duly made amends by notching the host nation’s second of the night thanks to a towering header on 30 minutes from Ji Dong-won’s pinpoint cross from the left.

After a blistering Ki Seung-yueng drive had come close to stretching his side’s lead, Myanmar mustered their first real chance of the game five minutes into the second period when Ko Ko Kyaw connected with David Htan’s free-kick only to flash a header narrowly wide.

Tottenham Hotspur ace Son Heung-min was introduced shortly after the hour mark and the talented 23-year-old wasted little time in making an impact.

With 82 minutes on the clock, the former Bayer Leverkusen star delivered a perfect free-kick from which the unmarked Jang converted, before playing in Nam Tae-hee to score Korea’s fourth and final goal of the game.

The group winners and four best runners-up (total 12 teams) will advance to the 2019 AFC Asian Cup finals and the final round of qualifying for the 2018 FIFA World Cup.

The next best 24 teams from the preliminary stage of the joint qualifiers will compete in a separate competition for the remaining slots (12 slots or 11 slots + 1 slot for the host) in the 24-team 2019 Asian Cup.