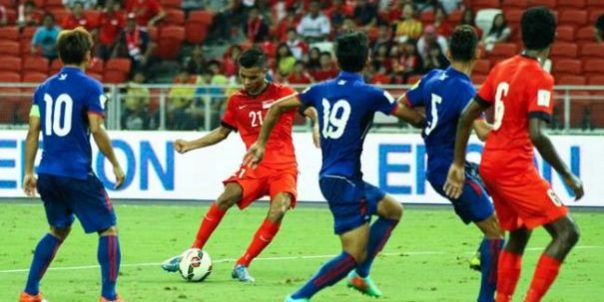 SINGAPORE (8 Nov 2015) – The FA of Singapore (FAS) have announced the squad that will take on Japan and Syria in the FIFA World Cup 2018/AFC Asian Cup 2019 Qualifiers on 12 and 17 November respectively.

Twenty-year-old forward Taufik Suparno, who joined Courts Young Lions (CYL) from Tampines Rovers FC (TRFC) last month, has been called up to the National Team for the first time. It caps a good year for Taufik, who starred in TRFC’s march to the 2015 Great Eastern-YEO’S Prime League title before recently making the step up to the Great Eastern-YEO’S S.League with the Singapore developmental side.

“This is a young team with an average age of 25.1. I have included two of the best young talents in the S.League – Amirul Adli and Taufik Suparno – who have performed consistently well in the past few weeks. Taufik deserves the call-up and it will be a key opportunity for him to train with, and learn from, the best national players in Singapore during the next two weeks, including captain Shahril Ishak and Hariss Harun,” said Singapore coach Bernd Stange.

On the absence of Khairul Amri, Stange said: “Injuries and suspensions are part and parcel of the game. We feel sad that Amri will miss the matches against top Asian teams, and we hope that he recovers well.”

Ticket prices for these two upcoming matches will start from $10 for a concession ticket, exclusively for Singapore fans. Fans are advised to purchase their tickets soon as certain categories of tickets are selling fast.

The ticketing details are as follows:

* Concession tickets are applicable to Students aged 16 and below, and Senior Citizens aged 60 and above.