Set piece wins it for Laos over Sri Lanka 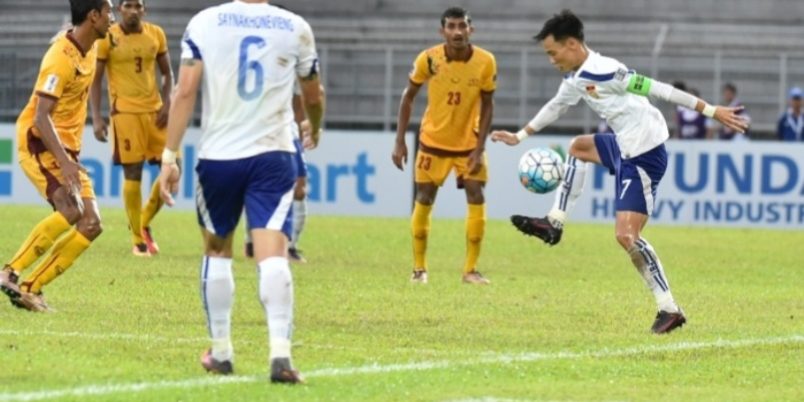 The game finished goalless at the end of the first half which saw the Laotians awarded five corner kicks within the short space of three minutes and despite failing to convert, they managed to open the scoring on 57 minutes through a Moukda Souksavath header following a corner.

“We took an exceptional number of corner kicks today, which created many chances, but we failed to convert most of them. But we had been training and preparing hard for set pieces and I guess our training paid off as we converted one of them into our first goal.

“We are very happy with the win in our first match. We didn’t have enough preparations for the tournament, but we did it and got our three points.

“I attribute this win to our teamwork, our togetherness. We played as a team and this had been ingrained from our first day of training.”

Laos then gave Sri Lanka a mountain to climb when Keoviengpheth Lithideth’s cross-goal effort from the right was tapped in by defender Sonthanalay. As the game looked to end in a 2-0 win for Laos, Sri Lanka did bring it one down three minutes into stoppage time.

“The last goal in the match by our opponents was really something and we knew that we had to fix our problems deep in defence,” continued Phomphakdy.

“We were leading 2-0 and that goal shouldn’t have come but my players stuck together and concentrated until the final whistle to maintain our lead and it worked thankfully.”

Sri Lanka coach Duddley Steinwall rued the too-late goal but believed that it showed his players can shine despite his team playing only in three friendlies after their SAFF (South Asian Football Federation) Championship in December last year.

“We converted our chances very weakly, especially in the beginning of the first half where we had a lot of excellent chances. Overall, we played well but we need to fix our individual mistakes,” he said.

“But my team never gave up and kept playing until the end and in the last 10 minutes, they successfully managed to cast doubt within our opponents and scored our goal.

“It came too late to make a difference in the game but it proved that our players can make it and take the toughest challenges and I hope they will take that to heart and give even more in the next match.”