SECOND ROUND OLYMPIC QUALIFIERS: IT'S ASEAN VS WEST ASIAN RIVALS 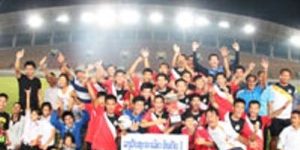 KUALA LUMPUR (30 March 2011) – AFF members, Vietnam, Thailand and Malaysia, will all face West Asian rivals in the second round of the London Olympic qualifying competition.

In the draw conducted at the AFC headquarters here today, the Asean teams will have to battle the likes of Saudi Arabia, Bahrain and Lebanon in the second round.

The three AFF members were among 11 teams that advanced from the first round. The 11 teams joined 13 other nations that qualified directly for the second round which will be played on a home-an-away basis on June 19 and 23.

Recently crowned AFF Suzuki Cup champions Malaysia will face Lebanon, who are ranked 169th in the FIFA rankings. Despite winning the coveted title late last year, Malaysia are the lowest ranked among the three AFF teams in the second round at 138th.

Thailand are 20 slots higher at number 118 while Vietnam are ranked 134th in the world. The Thais, probably still one of the best teams in the region, will take on Bahrain while Vietnam will have to deal with mighty Saudi Arabia. All three AFF teams will play away first.

Australia, who are in the Asean zone, will battle another West Asian nation, Yemen, in the second round.

Following the conclusion of the second round ties, the 12 winning teams will be divided into three groups of four teams each in the third round. Teams will battle for survival on a home-and-away basis between Sept 21 and Mar 14, 2012.

The group winners will advance to the Olympics while the three second placed teams will have to battle each other in a carnival format tournament from Mar 25 to 29 next year. The winner from this three-nation event will have to defeat a team from CAF to book their place in the Olympics.

Asia have 3.5 places in the London Olympics men’s football tournament.