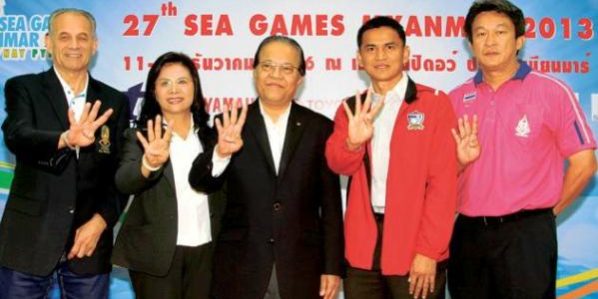 BANGKOK (1 Dec 2013) – Datuk Worawi Makudi, the president of the FA of Thailand (FAT) have promised a clean sweep of all four football titles at the SEA Games in Myanmar which begins next week.

“We have to accept that there are high expectations in football. And the bar goes even higher after our failures in the previous two editions of the Games. We’ve prepared all our four squads for the Games with regular training,”’ said Datuk Worawi.

“We have repeatedly told the coaching staff and all those involved that the gold medal in the men’s football competition is the most important one. We find ourselves in the same situation as hosts Myanmar. The Myanmarese don’t care much whether their country finish as overall champions as their main target is to win the gold in football.

“If we do win the gold medals, the men’s football team will get THB5 million (USD155,000). The other three sides will receive incentives as well but I can’t tell you how much at this stage. I can only promise that they will get not less than THB1 million (USD 31,000).

“We know well that our team will play under heavy pressure at the event but I’m confident all four teams will return home with gold medals.”