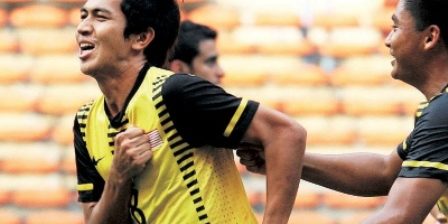 PETALING JAYA (25 May 2013) –The Harimau Muda team finally scored their first win in their sojourn of Europe with a close 2-1 victory over club Slavia Praha of the Czech Republic. The win was the team’s first in nine matches.

After trailing by a goal, the Malaysian Under-23 team fought back with a freekick from Wan Zaharulnizam Wan Zakaria before striker Rozaimi Abdul Rahman struck the winner in injury time.

They held the Slovakian U19 team to a 1-1 draw as well as drawing scoreless against the Norwegian U19 squad. In their last match, they fell to a 2-0 loss to Nitra FC of the Slovakian First Division.

Harimau Muda’s next game will be against Sparta Praha, another club from Czech Republic’s First Division in Prague next week.