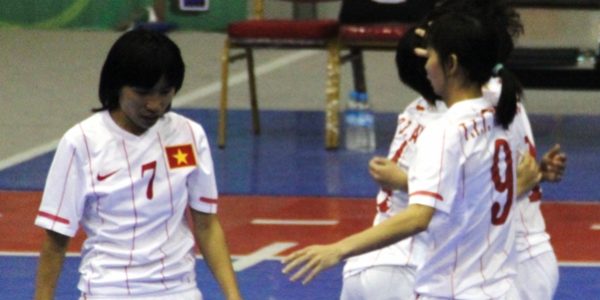 NAYPYITAW (18 Dec 2013) – It needed a late equaliser from Thi Huyen Linh Vu before Vietnam were assured of making the final of the women’s Futsal event after drawing 3-3 against Malaysia in their final group game here at the Naypyitaw Futsal Stadium.

Up till then, the score was 3-2 to the Malaysians, who needed a win to make the cut for the final tie.

“We did not play well at all,” said Vietnam coach Rakphol. “We lacked our usual game and that gave the Malaysians the chance to score. Obviously, we need to make changes for the final.”

Vietnam had gone into the game on six points as against Malaysia’s four and needed only a draw to stake their place in the final. And this led to the team not able to stay focus as they allowed Malaysia more possession at the start.

But for the Malaysians, despite having control and creating the early chances, they just could not make it count and it was one quick counter-attack in the sixth minute that Vietnam went in front when Thi Huyen played the ball to Thi Thuy Trang Tran to slot it past Malaysian custodian Noorhayanti Mohd Salleh.

Down at the half, the Malaysian girls went in harder into the second half and just two minutes in, Hanis Farhana Shamsul Azizan crashed through the Vietnam defence for the equaliser.

However, Thi Huyen managed to put Vietnam ahead in the 29th minute as the Malaysian girls then replied with the equaliser through Nur Izzati Khairuddin in the same minute and then the lead for the first time in the match off Norhawa Mohd Yasin a minute later.

But that 3-2 lead for the Malaysians did not last long as Thi Huyen then nailed the all-important equaliser not too long afterwards to put Vietnam in their second final in two editions of the SEA Games.

“We are playing at a much better level than we did before,” said Malaysian coach Marcelo Serpa. “Now, it is a question of making sure that the team win more often which is so very important.

“I just want the girls to win, they deserved it.”

With the one point, Malaysia finished third and automatically win the bronze.