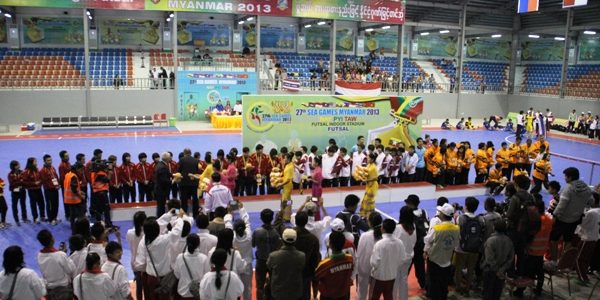 NAYPYITAW (20 Dec 2013) – The Thai women’s Futsal team grabbed their second crown in two editions of the event to at once be rewarded with USD 62,000 (THB 2 million) by the FA of Thailand (FAT).

Dr. Ong-Arj Kosinkar, the general secretary of the FAT, said that the reward was in line with the programme that has been set and where he expects more windfall to follow suit.

“This is what the FAT can give, but I believe there will be more incentives for the girls,” said Ong-Arj. “They certainly deserved it.”

In the final against Vietnam this afternoon at the Naypyitaw Futsal Stadium, there was certainly more control and tenacity in the Thai game. And with the determination showed early in the game, it came as no surprise then that Prapasporn Sriroj popped in the lead early in the very first minute of play.

Defensively sound, the Vietnam girls tried everything they had in their arsenal to break down the stubborn Thai defence but goalkeeper Pannipa Kamolrat was just in her mettle to deny them the equaliser.

Thailand went on to score the second goal of the game in the 14th minute through Orathai Srimanee as they went into the break in confident mood.

After the break, Vietnam tried to go forward but six minutes in, they fell further behind when Siranya Srimanee slammed in the rebound. With there goals up and with the gold medal within reach, Thailand did not step off the pedal as Orathai then grabbed her second and the team’s fourth in the 36th minute.

A minute to the end, Pacharaporn Srimuang finished off a failed clearance to give Thailand the win they sorely deserved.

“At least we tried but Thailand were just too good,” lamented Vietnam coach Rakphol Sai.

A match of high intensity