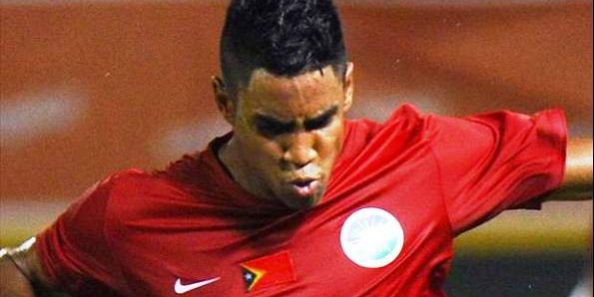 YANGON (12 Dec 2013) – Timor Leste picked up their first win of the SEA Games football competition when they edged Cambodia 3-2 in a Group B tie at the Youth Training Centre in Yangon tonight.

Diogo Rangel turned hero when he netted the winner in the 87th minute. A well struck free-kick from well outside the box, Diogo curled his shot past the wall and into the far right corner.

Despite their win, Timor Leste’s hopes remain slim. They have one last group match against arch rival Indonesia. For Cambodia, today’s loss was their third here.

In an earlier match at the same venue, Thailand defeated Indonesia 4-1 to edge closer to a semi-final spot.

In tonight’s match, Timor recovered to head to the dressing room with a one-goal lead. But they did not have a good start, in fact they could have been trailing by at least two goals.

Cambodia’s Chhin Chhoeun ripped down the left and relayed it back to Bin Chantha Thearry. Despite being unchallenged and having the time to line up his shot, Bin’s shot turned away from the left post.

They made up for minutes later when Sos Suhana drove in a rebound from Phourng Soksana’s initial shot.

Timor drew level in the 28th minute. Filipe Dos Santos finally broke through the defence but his shot was cleared of the line. Jose Carlos Fonseca picked up the loose ball and packed it in.

Fired up by the goal, they pressed on to earn their second three minutes before the break. Pedro Gois pounced on a defensive mistake to give his team the lead.

Cambodia could have sealed the game in the second half but missed several good attempts. Instead, it was Timor who struck the winner.