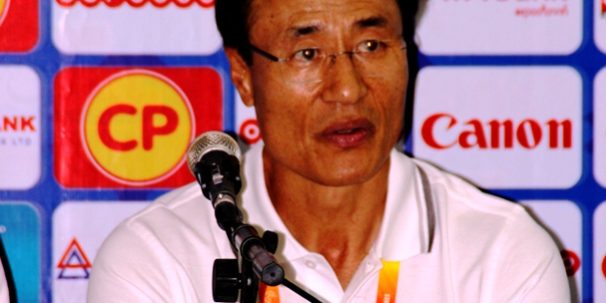 YANGON (18 Dec 2013) – As expected, the Myanmar Football Federation (MFF) have part ways with South Korean coach Park Sung-hwa, after the latter’s failure to lead the team past the group stage of the men’s football event.

Myanmar fell to a 1-0 loss to Indonesia in their final Group B match in Yangon which led to the team’s exit even though both teams are on the same number of points after four matches.

But under AFC rule, goal difference does not come into account where it is head-to-head result between both teams which will matter.

“The MFF have decided not to renew the contract of Park,” said Ko Ko Thein, the deputy general secretary of the MFF. “He will go back to South Korea on 26 December.”

Sung-hwa has a contract till end of December and was hoping for an extension, where he had also been previously tasked with leading the Myanmar Under-22 team for the AFC U22 Championship which will be held in Oman in 2014.