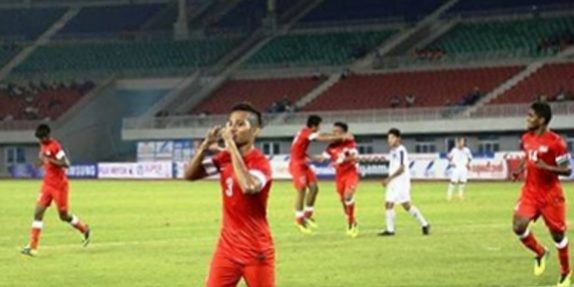 NAYPYITAW (10 Dec 2013) – Striker Sahil Suhaimi struck late in the first half to give Singapore a 1-0 over Vietnam in a crucial Group A encounter at the Zeyar Thiri Stadium this evening.

The Singaporean side, who were held to a disappointing 1-1 draw by Laos two days ago, was more meticulous in their game plan as they absorbed the relentless Vietnam onslaught.

As usual, Vietnam played to their usual, quick passing game as they bashed the Singapore backline on the get-go with Le Van Thang missing the top corner early in the tie.

Singapore then replied with a double chance from Shafiq Ghani and Zulfahmi Ariffin but Vietnam stood their ground to deny them. With Nguyen Van Quyet and also Ha Minh Tuan unable to do any better, it was Singapore who finally broke the deadlock in the 42nd minute when Sahil shot from outside the box which came off defender Pham Manh Hung for the lead.

The second half was all Vietnam as they pressed hard for the equalizer as Singapore maintained their discipline at the heart of defence. And with goalkeeper Izwan Mahbud in excellent form, there was no way through as the young Lions squad picked up their first full points of the competition.