SEA GAMES 2013: Penalty Turned the Game for Us – Sung-hwa 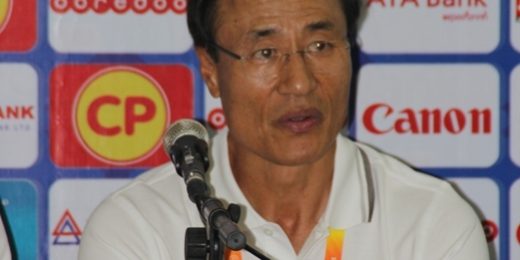 YANGON (10 Dec 2013) – Myanmar coach Park Sung-hwa admitted after their match against Timor Leste last night that the penalty late in the second half turned the game in their favour.

Myanmar picked up their second full points in Group B after beating Timor Leste 3-1 with two late goals in the second half off a penalty from Kyaw Ko Ko and then Kyi Lin’s superb individual effort.

“I thought that we did not play too well in the first half. We scored the lead and then we got one in return,” said Sung-hwa (pix).

“At the start of the second half, we struggled a little bit up until the penalty. That goal pushed us to play our usual match and then we got the third goal.”

Following the overwhelming support for the Myanmar national side, there was added pressure on the team to deliver the football men’s gold – considered as the mother of all gold medals at the SEA Games.

But while, Myanmar had a strong start to their campaign when they comfortably beat Cambodia in the first match, the second tie against Timor Leste showed that the team can be vulnerable at times.

“Now we have a few days rest, we have to prepare well for our next match (on 14 Dec 2013) against Thailand,” added Sung-hwa.