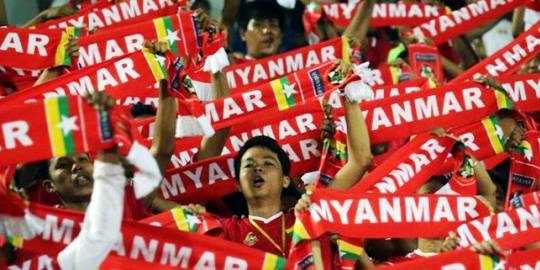 MANDALAY (20 Dec 2013) – Hosts Myanmar turned up the heat on a cold day here in Mandalay to defeat Malaysia 6-0 in the women’s SEA Games football third-fourth placing playoff at the Mandalar Thiri Stadium this evening.

The bronze was some consolation for Myanmar after narrowly missing the final in a sudden-death penalty shootout with Thailand two days ago.

Although their team were out of the final the fans, some 20,000 of them, came out in full support and were treated to a fiesta of goals which began in the 24th minute when Yee Yee Oo rifled in a rebound off the crossbar from an earlier strike from her teammate Khin Marlar Tun.

Khin Moe Wai doubled the score after coolly connecting in a cross from Naw Arlo Wer Phaw in the 39th minute.

Just before the break, Than Than Htwe netted a superb goal. From some 25-metres out, she let loose a lovely shot that dipped over Malaysian keeper Nur Izwani Azman.

Nur Izwani had actually been in excellent form and managed to stop the earlier attempts from the Myanmar strikers. Had it not been for her, the score could have been higher at the break.

The Malaysian keeper kept up her good work and kept Myanmar from getting through for the first 25 minutes of the second half. But despite her best efforts, Nur Izwani could not stop three more goals from going past her.

In the 70th minute, Yee Yee Oo powered past two defenders down the middle and placed her shot in the right corner, just beyond Nur Izwani’s reach.

Myanmar sealed their win with two more strikes in the 82nd and 90th minutes from San San Maw and Myint Myint Aye respectively.