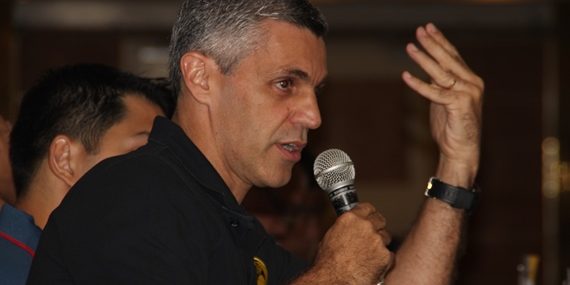 PETALING JAYA (11 Nov 2013) – Taking advantage of an on-going AFC Futsal qualifiers next month, the Malaysian Futsal team have confirmed test matches against Kuwait and Lebanon as part of their tune for the 27th SEA Games.

Both Kuwait and Lebanon will play in the AFC Futsal Championship qualifiers for West Zone at the Nilai Indoor Stadium in Malaysia. The other teams playing in the qualifying round are Qatar, Iraq and Saudi Arabia.

“So far we have confirmed these matches as part of our preparation for the SEA Games,” said Marcelo Serpa (pix), Malaysian Futsal coach.

“We are looking at playing two good games against quality opponents just before we head for the SEA Games in Myanmar.”

The Malaysian Futsal squad will play against Kuwait and Lebanon in the first week of December just before their departure for Naypyitaw.

For the SEA Games, Malaysia are in Group A against hosts Myanmar and Indonesia. Group B are Thailand, Vietnam and Laos.