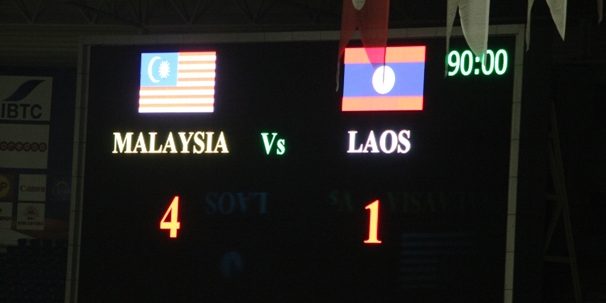 NAYPYITAW (13 Dec 2013) – The performance was far from impressive and for the second match in a row, Malaysia just did enough to scramble to a 4-1 win over Laos in their second match of Group A of the men’s football event here at the Zeyar Thiri Stadium.

The start was anything but racey but the closing gave certain confidence to the Malaysian camp as striker Ahmad Hazwan Bakri completed his hat-trick to put them in a good stead for their next match against Singapore in two days.

“The most important thing is the three points. We were not so hot in the first half, but we played better in the second half,” said Malaysian coach Datuk Ong Kim Swee.

After Ahmad Hazwan had given the Malaysians the lead in the seventh minute when he made good on the hardwork from T. Reuben, the Malaysians played a more patient game as Laos resorted to long passes.

Not necessarily overly defensive but a little more systematic and certain commitment to defending although just before that break, their approach would come back to haunt them when Laos nailed the 41st minute equalizer.

Off a freekick from Khonesavanh Sihavong from the left, Souk Aphine Vongchiegkham headed home as both teams trooped on level terms.

Malaysia began brighter into the second half when Phouthone Innalay fired in a 50th minute feekick which forced a full stretch from Laos goalie Seng Athit Somvang.

Just few minutes later, Laos’ Khonesavanh was on the prowl but after crashing in from the left, he just could not beat Malaysian custodian Mohd Izham Tarmizi Roslan.

Right at the hour mark though, Malaysia clinched their second goal of the game when Ahmad Hazwan slammed home the cross from Muhammad Nazmi Faiz.

Laos tried to push forward but in the 80th minute, they fell further behind Ketsada Souksavanh put the ball into his own net following a floater from D. Saarvindran.

And three minutes to the end, Ahmad Hazwan completed his hat-trick to complete Malaysia’s win.

“We made some mistakes in the second half but Malaysia were a strong team and that made it difficult,” said Laos coach Kokichi Kimura.