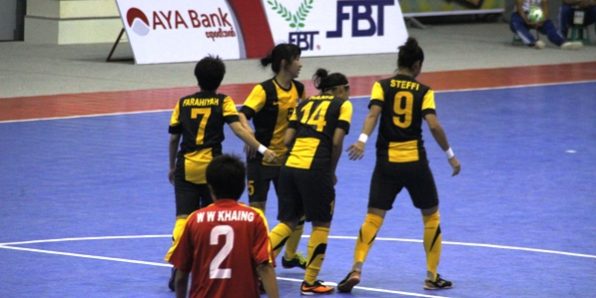 NAYPYITAW (12 Dec 2013) – Fatin Shahida Azmi scored two opportunistic goals early in the game to guide Malaysia to a 4-2 win over hosts Myanmar in the women’s Futsal event of the SEA Games that was played this afternoon at the Wunna Theikdi Futsal Stadium.

“It was a good start, now we will look to playing Indonesia,” said Malaysian coach Marcelo Serpa.

As early as second minute, Fatin raced in from the right before firing a shot past a static Myanmar keeper Zin Min Tun before doing the same yet again from the left five minutes later.

In the 16th minute, Siti Noor Halimi Hussain turned in Myanmar defender Khin Mar Lin for the third Malaysian goal as the hosts then grabbed their first goal of the game through Shwe Zin Aung just before the break.

A minute into the second half, it was Nan Khan Mo who gave Myanmar their second goal when she capitalised on a defensive error from Hanis Farhana Azizan.

But it was Hanis who then made up for her mistake with the fourth goal for Malaysia a minute later to take the game beyond the reach of Myanmar.

The loss for Myanmar was their second after going down 6-0 to Vietnam two days ago.