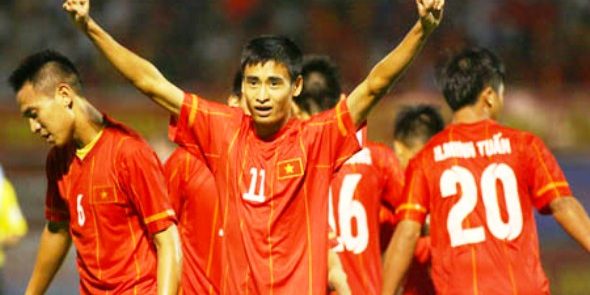 NAYPYITAW (8 Dec 2013) – Vietnam made a scorching start to their campaign in Group A of the men’s football event at the SEA Games when they thrashed Brunei 7-0 here at the Zeyar Thiri Stadium.

Vu Minh Tuan and Ha Minh Tuan were quick with a double when they found the back of the net within a space of three minutes to score in the 22nd and 25th minute.

Just a minute before the end of the first half, Le Van Thang then slammed the third goal for Vietnam following a failed clearance from Brunei’s defensive lineup.

Brunei keeper Junaidi Akim was beaten yet again in the 53rd minute when Nguyen Van Quyet grabbed the fourth goal as Vietnam then ended the game as a competitive tie with further goals from Tran Manh Dung in the 66th, Mac Hong Quan in the 69th and Tran Phi Son, eight minutes to the end.